Crash The Rocket Ship To WWEternia 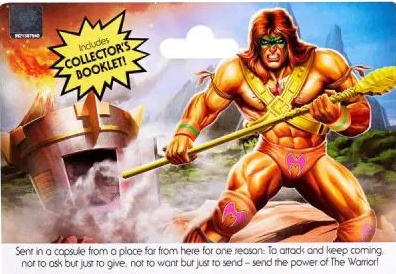 I can't express just how great the Masters of the WWE Universe toys are. As one can easily deduce, the line is a crossover series with wrestlers in MOTU bodies and styling. But it goes far beyond that. The toys are combining the classic homages of MOTU characters and each wrestlers personality. The Ultimate Warrior was born for this line and he's in the fist wave. At first glance you'd see him and laugh that it's just Warrior as a He-Man toy. They play that up quite a bit. The text from his character bio is taken from one of his promos as is the crashed space capsule in the artwork. It's insane and it's perfect. 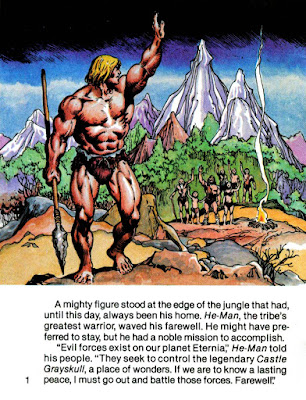 However, he's not just the Ultimate Warrior as a He-Man toy. Before Prince Adam and the backstory we all know, He-Man was originally a warrior from a jungle tribe that came into owning the power sword differently. Later the Prince Adam origin came to be and this was dropped until the MOTU Classics series made a figure of this incarnation. Now a character known as Oo-Larr, whom was a previous He-Man prior to Prince Adam. It's amazing that Mattel took such lengths with a toy seemingly meant to be a novelty and made it so dang cool.
at February 04, 2020
Email ThisBlogThis!Share to TwitterShare to FacebookShare to Pinterest
Labels: fantasy, He-Man, Masters of The Universe, masters of the wwe universe, mattel, oo-larr, the ultimate warrior, ultimate warrior, wwe, Zone Base