Another cool thing in the big Masters Of The Universe relaunch this year is the Eternia Minis. A neato blind box mini figure series set for retail this fall. If they look familiar, it's because they're the MOTU Minis formerly offered by Matty Collector. I missed out on most of the Matty Collector stuff as I was going through a bad spell financially when they launched and by the time things got better, the web store was completely out of my headspace.

Though I did get some of the stuff, I missed out completely on these. Which is a shame as they're awesome. Thankfully they're getting released again and in blind packed in tiny Castle Grayskulls. Fair warning, I'm going to be completely obnoxious getting these at stores. If you're at Five Below in Georgia and some Sasquatch shoulder checks you out of the way in front of these. That was me. Hi. I'm a blind bag/box addict admittedly, but when it's something I already like, it's practically already sold. 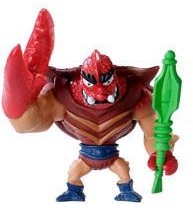