The Mamba And The Mummy


THE COBRA MAMBA, a fast attack copter with laser guns and missiles on both sides. A giant purple and black menace featuring two detachable attack pods and twin rotor blades that looked amazing when they weren't hitting each other. In 1988, while on a spring break spent at my Grandma's house, THE COBRA MAMBA went on it's most devious mission yet. A museum robbery. Did I mention I was in the 4th grade?

My fathers mother lived in an extremely small town on the border of Alabama and Tennessee called... what the hell was that town called? Her randomly placed house was on some sort of family land with her sisters house on the other end of said land. My parents thought it would be a good time to visit for a few days with us returning home before my birthday at the end of the week.

I spent those days in a living room that she never went in, with a TV she never watched. We eventually went to KMart and I was allowed to pick out some toys and get my birthday present early. What did I pick out? THE MOTHERFUCKING COBRA MAMBA!  Now those days of boring syndicated reruns featured grand adventures and boring syndicated reruns until I had to go to bed each night. Going to bed consisted of wondering what that was growling outside as I tried to fall asleep on the couch.

It was one of those nights where I staged the most epic adventure to be played out in the history of ever. A museum was set up on the end tables in that living room with all her weird old lady bottles and ashtrays serving as the antiques. Let me tell you about this museum, it had all sorts of treasure. Who doesn't want treasure 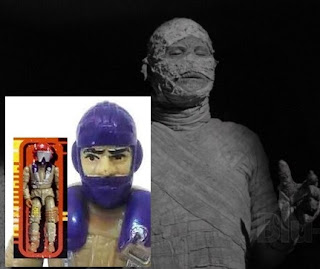 In the above picture is a mummy next to the Mamba's included pilot the Gyro Viper. You may notice without his helicopter flying helmet he indeed looks like a mummy... kinda sorta. Deep inside the museum,  a sarcophagus held a mummy! Until after closing time when... the mummy walks! Shedding his strips of dusty mummy cloth to reveal it was THE GYRO VIPER IN DISGUISE! Now free to an empty museum he loads up all the treasure on the now waiting COBRA MAMBA in the crime of the century. Aided by fellow members of Cobra displaying an admirable amount of teamwork. 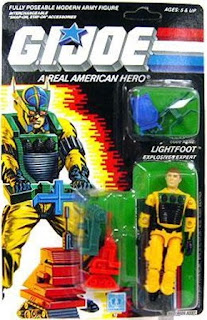 Fortunately Lightfoot (the only non-Corba guy I got at that Kmart) was nearby looking for mines with his robot thing. Lightfoot looked up and saw THE COBRA MAMBA near the top floor of the museum being loaded with bags of stolen treasure! I don't know of you've noticed Lightfoot's lack of included guns. He had a mine detector and a robot. Though only a fool would ignore Lightfoot's arsenal of grenades located conveniently on his chest. It was time to get tough. Joe tough.

Lightfoot and his robot ran into the museum throwing grenades in an all out attack on the evil forces of Cobra! The Vipers scrambled, shooting off rounds from their guns before jumping into THE COBRA MAMBA! A fast attack copter with laser guns and missiles on both sides which took to the air! Flying fast towards Lightfoot firing the laser guns and rockets on bot sides! Thankfully the robot had a few tricks up it's sleeve and jammed the missiles mid flight causing them to explode!

The Vipers launches their attack pods and began chasing both Lightfoot and his robot who threw grenades in counter attack! One lucky grenade exploded a little too close for comfort and the cowardly Vipers retreated! Lightfoot watched THE COBRA MAMBA fly out of the apparently huge museum window and into the night sky. In hindsight I'd really like to know what they built that place out of.