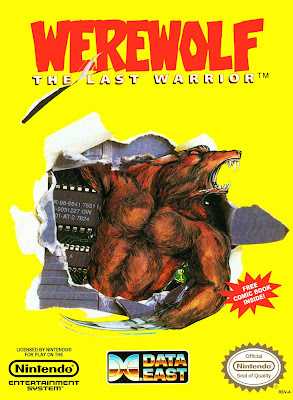 When I was in middle school, the most amazing game came out. Werewolf: The Last Warrior. You can guess I was sold instantly. Play as a werewolf, post apocalyptic setting, evil mutants... how could I resist? Fortunately the game hit the discount bins pretty fast and I got a copy (if it wasn't a birthday or Christmas...). The game was pretty good I thought and I spent many nights with it.


As you can see from the play through video, it's a pretty standard fare NES action platform game similar to Castlevania. Great music, pretty decent graphics, all around not bad. Thing is, like most games from it's era, the Japanese version was pretty unique. 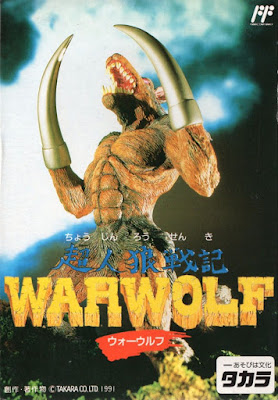 Distributed by Takara in Japan instead of Data East. At 13 I knew nothing about the various companies. There was no internet for me to learn such things and really, I was a kid. I didn't care. I took note of companies, sure, but it don't go much further than that. I did notice that the logo from some of my Transformers was on some of my games. Kinda like LJN, but Takara games were better.

I'm not going to make it out like the two different versions are completely different games. But there is neat differences to take note of. In Japan, the game is named Super Werewolf Chronicle - Warwolf. I'm honestly not sure if I think that's a better name than Werewolf: The Last Warrior, but sounds like a series more than a stand alone game. I wonder if a series was planned? Being that the game wasn't that much of a hit (not really one at all), there wasn't any sequels. I don't think the Warwolf makes any other appearances in other Data East games either. With a name like that and a look at his design, it's not hard to fathom that somebody thought the character could star in multiple adventures.


If you compare this play through with the above one, you can see the various differences. Mostly sprites here and there and story line adjustments. Going back to my theory of the game being a planned series, check out the 'The End' screen. 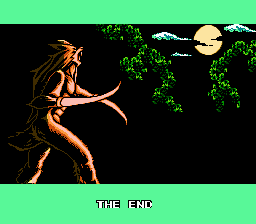 That's from the Japanese version. Sure looks like the Warwolf is ready for more adventures huh? Howling at the full moon, sword hand things posed for fighting. Yeah, we've got a new hero right? But check out how the American version cranks that up a Monster Jam notch. 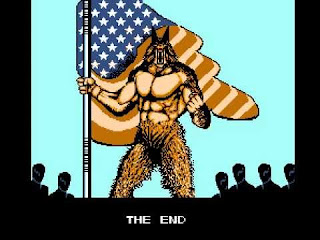 I want a t-shirt of that. Nothing says establishing a new hero more than that straight out of WWF glory in 1990. Weirdly enough, the game came out first in America by almost 7 months. You'd figure the timing wouldn't have been the best to launch a new series of games as the Super Nintendo was gearing up for release in America and already well underway in Japan. Perhaps it was planned for an earlier release and things happened. There's not really much information about the game out there aside from 'hilarious' articles about how bad the game is. It could be bad I suppose, just because I loved it in middle school doesn't mean it's a good game.

I've seen random fan art of the game, the occasional perler bead creation or two, but that's it. I'd love to see some indie toys of the Warwolf. I guess any werewolf figure could stand in, but those sword arms man. He's make for a great keshi or sofubi. I could see Battle Tribes make something special from him. It just needs to happen, you know?
data east monsters retro Takara the last warrior Video Games warwolf werewolf Zone Base