The Car's Carbon Footprint Is Murder 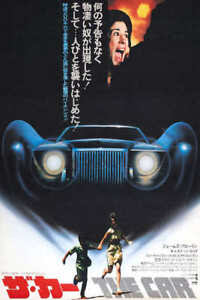 Dracula, Frankenstein, The Wolfman. These are names likely to come to mind when thinking about Universal Monsters. There's one forgotten monster from the studio that just... look, can we forgo the clever introduction? I just wanted to talk about The Car. The Car is a movie about an evil car that just murders anybody for no reason given aside from it's possibly demonically possessed. Maybe.


To give a brief synopsis of the movie, the car just shows up and starts running over people in a small desert town. That's literally the plot. Starring James Brolin as Chief Deputy Wade Parent. He's dealing with all these mysterious cases of vehicular homicide. Honestly I found myself caring more about the other characters in the movie. You have Deputy Johnson and his struggles with alcoholism, Sheriff Peck's heart of gold, and most importantly, a big ass car that just keeps murdering. 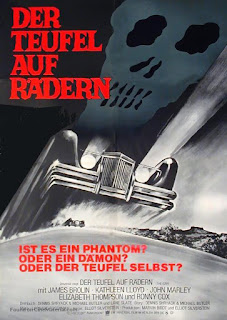 Did you notice I keep saying car and not the car's driver? Well, how astute of you to notice. I commend you for being such a keen observer and not pointing out the bazillion grammar errors I've mdae. The car doesn't have a driver. The car not only is just aimlessly driving around murdering for whatever reason, it's doing it all on it's own. Thanks to a quote from the Satanic Bible at the beginning of the movie by Anton LaVey(who also served as a technical advisor) combined with a scene where the car won't drive into the hallowed ground of a cemetery. It's implied that there's some demonic force at play. This is also implied by the amazing advertising. 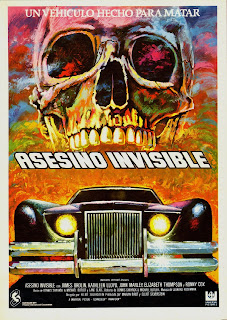 While initially the car's kills are random and generally just cases of running over people/off the road to their deaths, it later gets absolutely insane. The car begins targeting various characters do to their involvement with it. The kills? C'est magnifique.


Damn right that just happened. There's no denying just how amazing it is in it's pure unadulterated insanity. Not to mention, while the car may be the villain... you're hoping it wins. There's just no words (other than these I'm writing) that can fully capture the joy that comes from that big ass car doing horrible things. While it's defeated in the end, there's apparently an alternate ending of it driving around Los Angeles out there and I wished that was the real ending.

I wanted more adventures of the car and got nothing. So much nothing that they DID make a sequel in 2019 that completely missed the point. So much so I swear they didn't intentionally make a sequel and somebody at the studio just threw the name on. Literally the plot is about a car possessed by a Defense Attorney killing the gang members that killed him. In the the town from Streets of Rage I guess