G.I. Joe is the code name for America's daring, highly trained, special mission force. Its purpose: To defend human freedom against Cobra, a ruthless, terrorist organization who apparently has a ton of monsters just laying around. To be honest, I'm kinda at a loss at just how Cobra looses all the time. Even without monsters they have ninjas, punk rock pirates who's leader could just morph into other people. Some weirdo in a metal mask, a guy with a robot arm, a freaking mad scientist, a bootleg Dr. Strange, robot soldiers... and that's before you get to the secret city of snake people and the second (and better) leader who was a damn Frankenstein Monster with a portion of his parts coming from Dracula himself! 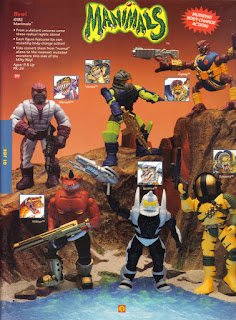 At some point Cobra decided to outright just start using monsters, because why the fuck not? The hell with those twins, we've got Mega Monsters! GI JOE had to make another special team called the MEGA MARINES to drive up in their Monster Blaster A.P.C to shoot a big ass rocket with. But not to be outdone, when Cobra took their antics to space, GI JOE had to utilize space robots. The Manimals would have come in around then, but something happened and they didn't see the light of day until the early 2000's. What are the Manimals you ask? 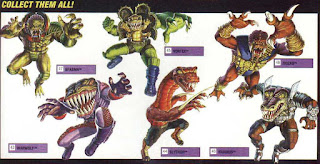 Freaking mutating solders that's what. I was lucky enough to score a couple on clearance at Kay Bee Toys and let me tell you, Manimals were freaking amazing. In case the Mega Monsters, snake people, and drug dealers weren't enough... mutant soldiers that changed into terrifying monsters should do the trick. With toys like Manimals, there's no rational reason for GI JOE not to still be on shelves. In the immortal words of Ronnie James Dio, it's always a mystery.


What if mutating soldiers and giant monsters STILL aren't enough? Well, just pull out the zombies I guess. Both Cobra and GI JOE have Eco Warriors teams. Utilizing things like toxic waste for evil, Cobra's cool Toxo-Vipers are awesome enough on their own.  Packing chemical sprayers and a shotgun... I just can't love these neon colored warriors enough. But you can't just go around squirting toxic sludge around and despite all the amazing stuff Cobra has, they have terrible quality control. Toxo-Vipers suits will eventually leak and create a new soldier called the Toxo-Zombie. I'm not kidding, they literally just call workplace accidents a new type of soldier. Somehow these new zombie soldiers were trusted with more chemical sprayers. At this point why the hell not? 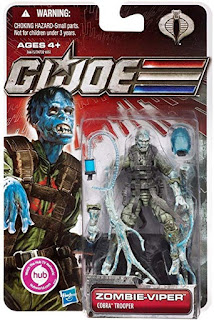 At some point Cobra decided accidental zombies weren't enough and developed Zombie-Vipers. According to the bio-card on the back, Compound Z is a chemical that just turns Vipers into zombies. Zombie (a monster known for dragging it's limps) soldiers with big tentacles hanging off their arms. After ten years of The Walking Dead and people dispatching zombies with sticks, starting to understand how the Joes keep winning.
at January 17, 2020
Email ThisBlogThis!Share to TwitterShare to FacebookShare to Pinterest
Labels: cobra, commercials, eco squad, GI JOE, GIJOE, Hasbro, manimals, Mega Monsters, monsters, mutants, retro, toxo-vipers, toxo-zombies, toys, zombie, zombies, Zone Base