Sega dreams of Gamera (and so do I)


I've had Gamera on my mind today, because I like him. It's a little unfair that Gamera doesn't have the most shinning legacy, admittedly being widely perceived as a low rent wanna be Godzilla will do that for you. But man, it's really hard to hate a giant fire breathing turtle. For one thing, Gamera's fights have always been crazy violent. In his goofier children's movie roots to his more darker and gritty 90's movies... Gamera's fights are usually full of blood shed, severed limbs, and carnage all around. It's just insane.

The commercial above is for a Gamera VMU mini game. Gamera has had some good showings in video games and while the Dreamcast may have been short lived, it's still pretty well regarded. The VMU was really before it's time. A memory card that served as a portable gaming device. It was pretty limited, but in time I could have seen it developing into something special. Sadly we'll never know as the Dreamcast, as great as it was, pretty much had all it's momentum killed by the PS2.

The game is called Gamera: Dream Battle. Basically it was for sale in a neat package loaded on a VMU with an included Gamera figure. Pretty dang neat. It was the standard virtual pet/monster fighter type game that was all the rage at the time. If somebody had the prior released Mothra: Dream Battle VMU, they could battle those as well. That's pretty dang great, Mothra vs Gamera, the winner is you. 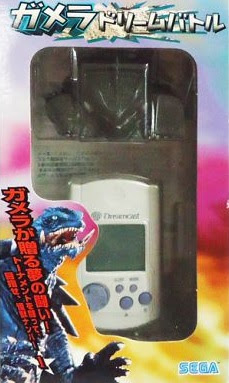