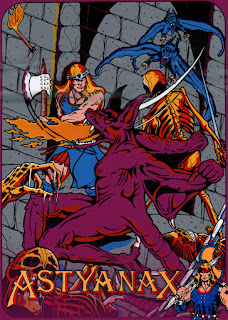 Astyanax is one of those games that people tend to forget about. Not for any particular reason, it's pretty good, though admittedly 30 years after it's release I'm still trying to pronounce it's name correctly. Funnily enough, you don't play as the Greek Mythology character at all, you play as a guy named Roche. In the NES version you play as a kid named Astyanax, I have no clue why.

I'm sure most people are more familiar with the NES game, I was too until discovering the arcade version at my local Pizza Hut. It's one of those cases where a home version plays pretty similar to the arcade machine, but is practically a different game. So much so that it'll get it's own post sometime later. I'm talking about the arcade game today. 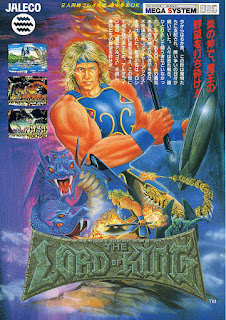 Released in Japan as The Lord of King in late 1989 and later in the US in early 1990 as The Astyanax by Jaleco, the game was the average quarter munching side scrolling arcade machine at first glance. Roche kinda looks like Simon Belmont. Player two gets an alternate palette Roche where this is even more apparent. A lot of fantasy themed games of the time had similar looking heroes, so I guess it was just the thing to do.

Roche's main and only weapon is an axe, which you mash the attack button to kill anything and everything that comes on screen. Not using the attack button makes the axe charge up into a fire version with a stronger attack. This of course takes time, so using it effectively takes a bit of practice. As all arcade games where designed to take every quarter out of your pocket, you'll find the fire axe is also a sneaky way of letting those bad guys get a cheap shot in. 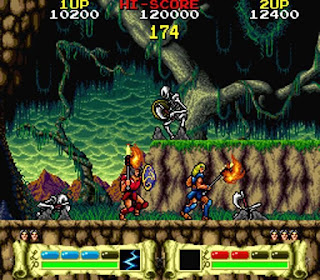 As you work your way through each stage, rock formations will rise from the ground. Breaking these open rewards you with such power ups as health/extra lives, magic attacks, and a shield. The shield is pretty useful and can take a lot of direct hits before being used up. The magic attacks are freeze spell that I probably don't have to explain, a fire spell that is a ranged damage attack, and a thunderbolt that hurts all the enemies on screen. I tend to hoard my magic attacks, saving them for the level boss. They're not super difficult, but like I said before, the game is designed to get as many quarters from you. So that extra firepower can come in handy for a much stronger enemy. 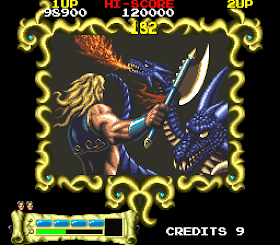 Between levels you're treated to a splash screen and bit of text furthering the story. Which is pretty basic 'killed him, keep going' stuff. If you noticed the blood spray in the above image, that's for good reason. The game is fairly gory. Not to the level of Splatterhouse or anything, but most enemies have a blood splash when your axe hits them. Some bosses lose their heads after defeat will the meaty bits inside in clear view. Pretty hardcore for the time.

A long time ago, an ugly battle was being waged every day as the world was ruled by demons. The people trembled with fear, with nobody to stand up for them. Until one day, a brave young man received a divine revelation from God and was granted the mythical Fire Axe. His name is Roche. Giving the people courage again, Roche embarks on a journey to the Castle of Algerine in order to defeat the demon overlord Argos and restore peace to the world.

The main villain is a nameless evil druid/priest playing into the evil demon theme. You'll get very used to seeing him as every time the machine needs a quarter, he's right there taunting on the continue screen saying ... something. Upon finally getting to him, you're in for a somewhat challenging fight. He phases in and out around the screen shooting force magic lightening. You've had harder boss fights, but that doesn't take away from the challenge he brings. After killing him, instead of a victory screen, you're instead suddenly whisked away to an H.R Giger level. There's no story screen or anything, you're just in an H.R. Giger painting fighting his type of creations. 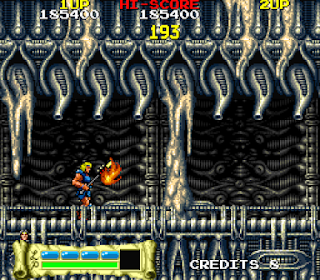 If I was to go by games of the times storytelling devices, I would either assume that this is meant to represent the source of the evil druid/priest's powers (aliens). That or you're supposed to be in hell, which just looks like an H.R. Giger painting... and that kinda works. 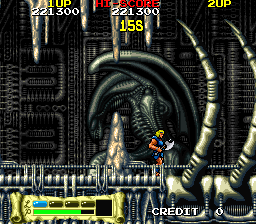 It's not the longest level, but still pretty challenging leading to needing a few more quarters. Though now that the evil druid/priest guy (I have no clue what his name is... Jordan?) is dead, the continue box is just a countdown to zero without the voice taunt. That's a pretty nice touch and a detail other companies would not bother with. Good job Jaleco. When you face the final boss and assumed actual villain of said demonic forces... 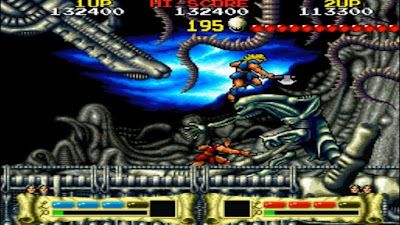 ... don't be too surprised to see a non-distinct Alien Queen. Several games at the time featured famous characters (and music) without permission. Though it's 100% fair to be surprised to see Aliens at the end of your fantasy game. It's completely out of the left field... and that's kinda what makes it so awesome. The Astyanax is a fun side scrolling action game and a pretty good one at that. It checks the 'looks like something I would have drawn on a spiral notebook in 5th grade' box on my awesome checklist.

I'm pretty disappointed I played the NES version first. Not because it's bad (it's pretty good actually), but because it was so different that discovering the arcade game at that Pizza Hut was full of initial bewilderment. If social media was around then, my status would have been WTF or a Baby Yoda meme. I really wish that I would have discovered it the way I discovered other great arcade games. With me, walking into the cigarette smoke filled arcade, music blaring, waiting for Chet and Wade to finish so I got a chance to play. I can hear them calling me socially unacceptable today names right now.
at January 31, 2020
Email ThisBlogThis!Share to TwitterShare to FacebookShare to Pinterest
Labels: alien, aliens, arcade, astyanax, demons, fantasy, giger, jaleco, monsters, nintendo, retro, skeletons, the astyanax, the lord of king, Video Games, Zone Base