If I had a Force, it'd be a Tiger one

With all the news around the upcoming Snake Eyes movie and new GIJOE toys on the way, it's been pretty hard for me to not get excited. GIJOE is another one of those things I grew up with that I've always loved. Sadly in more recent times the line has struggled to keep a presence in retail. I'm hoping this attempt is successful, because duh.

One of my favorite GIJOE teams is Tiger Force. A series of repaints using prior molds, Tiger Force made for some good looking toys. The above commercial states the premise of the new team and even outright admits that they're repainting older stuff. Though it makes sense (Tiger Force needs new gear!), the "use the enemies tech" ideology is a tried and true formula.

I really, really appreciate the original animation used in this commercial. It just looks amazing. Not to mention, like I said, Tiger Force just looks great. I don't expect for the new GIJOE stuff to revisit the old stuff much. Though if they did... I'd be pretty happy for some new Tiger Force toys. 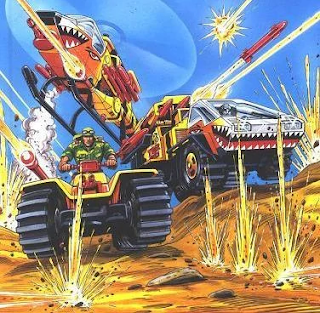