The other day I was pondering things to look for at Toylanta. Gobots are pretty high on the list. I always get one or two there. I love the little guys and thanks to their unfair 'poor mans Transformers' reputation, can usually get them pretty cheap. I decided to keep an eye out for Monster Gobots as I love them, but especially for Creepy. While I'd love to get the special mail away version as seen in the awesome commercial above... I'm not betting to hard on sucess with that. However, a standard version might not be impossible. He's mainly purple and black. Which brings a mental comparison I made years ago come to mind. 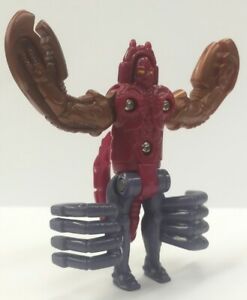 Look familiar? That's Transmetal Scorponok from the McDonald's Beast Wars Transmetals Happy Meals. It's not exact, but man they sure do look alike. Considering the first Beast Wars Happy Meal toys were all original characters, I wonder just how close it could have been to the Transmetal ones doing the same? Or perhaps using some other names not on shelves like one from the purchase of Tonka? Like... what if we were pretty close to Creepy as a Beast Wars character available with a kids meal? Probably not at all, but that similarity is super close.
beast wars commercials creepy Gobots Happy Meals Machine Robo McDonald's monster gobots monsters Scorponok Toylanta Transformers transmetal Zone Base