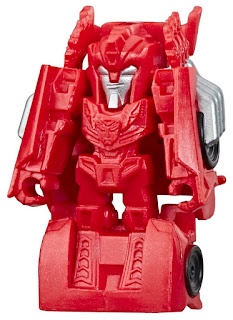 During the long holiday weekend (and much needed break), I was fortunate enough to finally find the Cyberverse Tiny Turbo Changers. I've been a big fan of the Tiny Turbo Changers and so far have gotten all of them aside from that last movie series that I could never locate (dammit). For those not in the know, Tiny Turbo Changers are a series of blind bagged Transformers figures. They are small and simple figures that transform in a few steps.

Imagine if a Micromaster was a bit more chunky in proportions and was more of a rubbery keshi figure and you've got the picture. The figures are generally 'cute' as in such a simple form that's pretty much the best bet (not to mention keshi are generally a little cute/silly). The Cyberverse series being the first non-movie based set follow in with something I've wanted for years- blind bagged traditional Transformers. Cyberverse is pretty much traditional Transformers and it's visual look really works into the whole 'cute' thing.

I went through the entire series and posted a bunch of pictures of them on my Instagram, so you can look at them all there and please like and follow while you're at it. I post a lot of the toys I talk about here as well as my various adventures. It's really the companion to this blog, so if you like what I do... you'd probably like what I do there also. Not to mention I don't e-beg, so that's gotta be refreshing.


Below are the figures in the assortment. 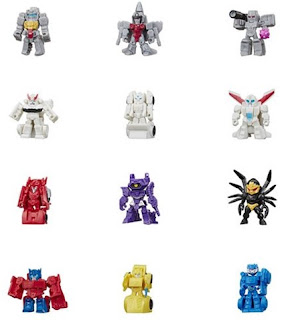 Codes for the blind bags can be found here.

Back to the figures, this was really a mixed bag. As you can see, you've got the usual cast of characters to be expected in a Transformers series initial offerings. Though there is some surprises like Blackarachnia and Drift. The colors are pretty basic, but some have more than others. That's part of the game with this type of figure. I've seen some folks paint up their keshi, if you're inclined to do that, they make a pretty good blank canvas.

Earlier I made the comparison with Micromasters, Bumblebee and Drift are really good examples of that. I could see them being easily confused by somebody out of the loop on these. I was really impressed with Grimlock, Hot Rod, and Prowl. The sculpting was really great on these and I found myself favoring them the most. Starscream, Jetfire, Shockwave, and Blackarachnia follow those three closely. They're sculpted really nicely and are pretty great in both modes. Megatron is packing some weaponry that the others lack. His trademark fusion cannon is present as well as his energy mace.

Optimus is pretty much traditional Optimus just without the face plate. The obvious Ultra Magnus repaint will probably look pretty good. Soundwave is probably the weakest of the bunch. He fits into that 'could be a Micromaster' category and looks pretty good. Just I found myself constantly worrying that I was going to break him. His slightly more involved transformation involves rotation and placement of his head combined with a somewhat tight fit of body parts in conversion is just close enough for calamity. I can easily see a more ham fisted person just ripping him apart accidentally. I was pretty gentle with him and probably could have done the same. Be careful with your Soundwave.

Overall I had a great time opening each bag and discovering the fun each figure had to offer. I'm really looking forward to series 2 more now than I was before (assuming I can find them). This is something I've wanted for some time now and having them in hand is awesome. I hope future series have deeper cuts in character selection. That's usually the case with this sort of thing and after 35+ years I honestly have no problems with the initial characters in the series. Though I... hold on... Bop by Dan Seals is playing... I'm back. Though it would be really great to see a bigger variety of characters offered in this series. It's a perfect delivery system for some some of the more oddball characters from the history of Transformers and it sure would be fun to get them in Tiny Turbo Changer form. 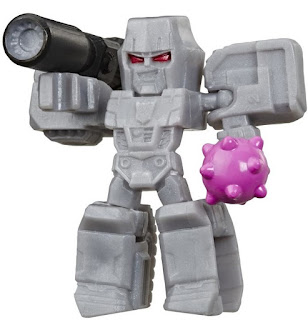