The new Star Wars movie coming out this weekend (tickets for Sunday morning!) and like many of you I'm super excited. Well, aside from that one asshole who just mmmaaagggiiicccaaalllyyy has a problem with anything popular. I'm a life long Star Wars fan and just outright love the series. With The Mandalorian charming the crap out of everyone each week, Star Wars is on a pretty high note right now.

I'm hoping to enjoy the new movie and I'm pretty sure I will. That's not ignoring any faults the movie may or may not have, that's just me usually liking a Star Wars movie. I'm not particularly concerned on what some critic says or anything. Nobody else gets to enjoy it for me and that's my advice to any of you who are bound to see nerds being wet blankets online. Just enjoy yourself and don't worry what some douche bag says.

Back to loving Star Wars, one of my favorite toy lines from the history of the series would be the Micro Machines toys. Micro Machines are great on their own, but you pair Star Wars with the concept and it's just gold. I was overjoyed when they brought back the Micro Machines with the new SW movies in awesome blind bags as well as in standard packaging. Though, for a while there in the 90's, they made them even better.

Action Fleet was a sub series of Micro Machines of larger toys. Not huge or anything, just larger. Essentially a miniature toy line. Tiny little figures of the characters with a tiny bit of articulation (as opposed to the tiny figurines of MM SW) with play sets and vehicles they could pilot and interact with. I admittedly like small toys as is, but you can't deny how awesome it is to have a small well featured X-Wing that had removable pilots and droids. I doubt it's hard to express just how awesome something like a fully functional Jaba's Palace that could easily be stored away in a shoe box. 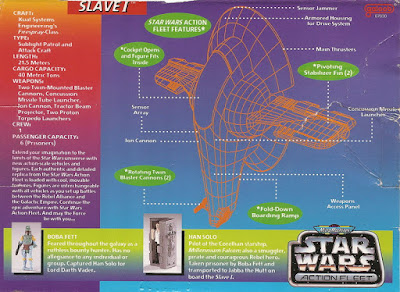