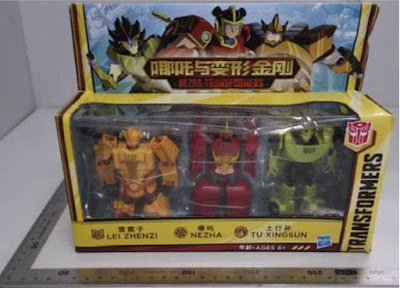 I've been watching this line develop as much as I could since it was announced. A Chinese exclusive Transformers series, Transformers X Nezha will be a cartoon and toy line for the Chinese market involving Chinese mythology. Details have been pretty scarce. Mainly getting a 'it's coming' blurb occasionally without anything really concrete. Honestly I had assumed it would be mainly a new cartoon involving current Transformers toys in a new setting. Today images of the toys were leaked out and I can't lie. I'm interested.

The image above doesn't reflect the line as a whole. There could be all sorts of size classes and such. Right now all we have is a fuzzy picture of what looks like a 3 pack of Legend/Legion scale figures. My affinity for this size class isn't a secret, nor is my fondness for the more unique things that happen in Transformers. I've been wanting Terracotta Army Transformers forever, and while this isn't the same thing, it's close. That traditional old world Chinese armor looks GREAT and really lends itself to Transformers design. Optimus Prime is a Samurai, Megatron a Sphinx. Ancient Chinese armor? Perfect.

I hope these aren't to hard or expensive to get, as I want some. I'm not saying I plan on going whole hog or anything, but definitely want a few and plan to pay attention to this. It's neat, it's cool, and it's different. Seeing as Tu Xingsun looks to be using the Prime Knock Out legion/legend class mold to some extent... and I'm seeing other familiar parts on the other two... I wonder how many original toys will be produced for this series vs remolds and recolors. Either way, I like this.
at November 15, 2019
Email ThisBlogThis!Share to TwitterShare to FacebookShare to Pinterest
Labels: army, cartoons, china, Chinese, legend, legend class, legends, legion, legion class, legions, neat, nezha, terracotta, Tiny TF, toys, Transformers, Zone Base