I'd make a more clever title, but crap Webdiver is 18 years old


There's specific times that make you realize more time has passed than you realized. Earlier I was thinking about 2001 and going crazy for Robots In Disguise toys. A lot of us were, except for those who had already gotten most of the line earlier by importing them. It was around that time Takara released Webdiver. Another transforming robot line with cartoon that was pretty similar to Transformers, like they did with Brave. I don't think it was very popular in Japan as there wasn't anymore series after the original. Or maybe putting the resources into other projects kept any more Webdiver from being released. Sadly, it was one and done.

That being said, it was pretty popular around the Transformers world. Not hugely popular, but maybe on a underground/cult level. Lot's of those TF fans who already had most of the RID stuff from importing seemed to latch onto it, as well as a good bit of general Transformers and robot toy fans. It was just a cool line. Great transforming robot toys and the video game gimmick was years ahead of it's time. I've only got two figures, in hindsight I should have gotten more. For awhile there you could get them for a song. These days not so much, but it was 18 years ago I suppose. 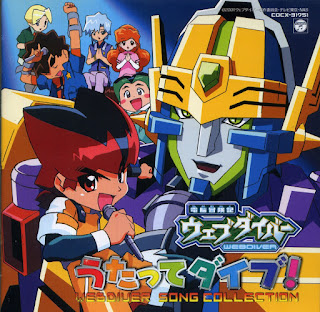