Air Raiders of the Lost Waft


For a while there, toy's that required air pumps were all the rage. They're still around, sure, but there was a time when a puff of air was the next big thing. Air Raiders by Hasbro was a very short lived toy line that was fully centered around poofing air into things. A small scaled toy line, the air gimmick was centered around the vehicles and play set. With included air pumps you could do things like fire missiles or propel a vehicle across the ground.

Honestly, it's a pretty fun gimmick that worked well with well designed and neat looking toys. Though it's legacy is more focused on the figures themselves than the vehicles the gimmick was focused on. I know even back then, I loved taking the tiny figures on all sorts of adventures forgoing the air poofing all together. You could even buy multi packs of the figures on their own and I pretty much just wanted those. 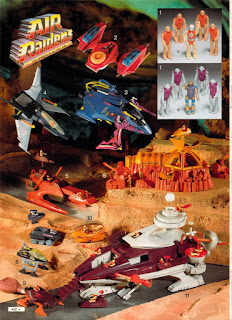 The love for the figures has resulted in various homages on the indie toy scene. Most recently a Designer Con exclusive set by Warlords of War. Warlords of War make really good figures based on the Glyos System and share parts with Battle Tribes, a line I really like. So it probably goes without saying that I'm jealous of those lucky enough to snag a set. 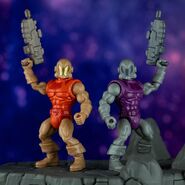