Something Spooky at 5 past the hour

I'm from Georgia and I was raised in the suburban areas that surrounded Atlanta. Being a child in the 80's and a teenager in the 90's put's me in a very odd spot. You see, when I was a kid, TBS was a local channel. Yes, the same TBS you probably watch Conan O'Brien on now used to be local UHF television when I was a child. Back then, all it ever seemed to show was old syndicated reruns, local sports, WCW wrestling, old movies, and old cartoons. All starting 5 minutes after the hour, to give you time to flip from what you were watching before the show started.

While this may sound bogus, it wasn't, it was bad ass. They'd arrange the shows into odd blocks. Tom and Jerry's Funhouse on TBS was like a mix tape of Looney Tunes, Fleischer, and Tom and Jerry shorts with Kid's Beat news segments hosted by Josh and Audra. Most kids were pretty big fans of the show as it came on in the afternoon and in the morning with odd local news interlaced. Therefore you could watch cartoons before getting on the bus. IF anything I had to sit through five minutes of local news before it got flipped to TBS. The news was really just the weather because nothing ever happened back then. Except Jonestown. 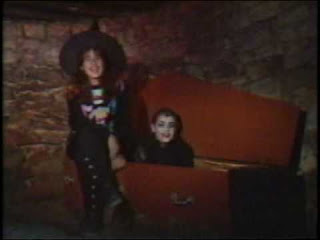 The cartoon block was so popular that it sprung various specials. Which brings us here today. Above is the bumber segments from the Tom and Jerry Halloween Special. A special that came on approximately 900 million bazillion times all through October every year. The segments aired between various 'spooky' cartoons and... in the video preview up there I swear Josh is smoking a joint.

Even with the hokiness of local television productions, they really put some effort into the special. Josh and Audra have a different costume in each segment and they filmed it at The Rhodes Hall Haunted Castle. For the record, that's not a haunted attraction... we just have a haunted castle in Georgia for some reason. Georgia's pretty weird. 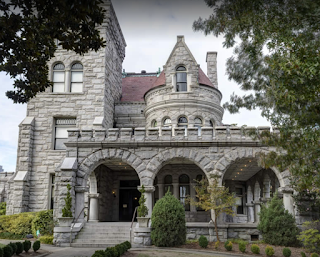