Crate Creature farted on my Keurig 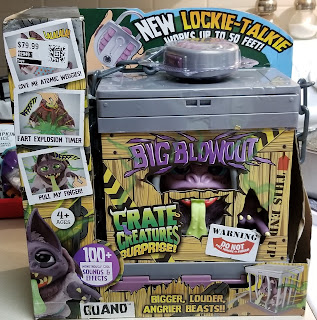 In a surprise turn of events, after reading my post on Boglins last week, Shawn put on his Superman cape and sent me a most surprising surprise. Inside a giant box was a Crate Creature, from the toy line Crate Creatures, who clearly take their inspiration from Boglins and a few other gross toys from the past. His name is Guano and this little shit is the best. 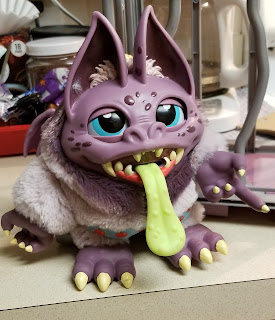 Unlike Boglins, Crate Creatures are not puppets. Instead they're fun figures full of play gimmicks. Guano here is from the Big Blowout series. Meaning he literally busts out of his crate and farts a whole lot. He farts, he burps, he talks, he screams in pain when you give him a wedgie, he even adorably giggles when you tickle him and snores when he's sleeping. Just like me. 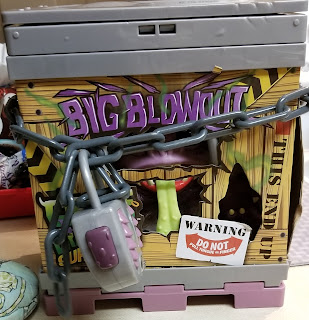 Like other gross toy lines, Boglins inspired other weirdo monster toys in between various low key revivals. It's super awesome to see the spirit live on in new ways. Crate Creatures are pretty great on their own... and I'm pretty tempted to get a few more now. It's hard not to love little Guano, especially when he had a padlock remote to make him fart from 50ft away. Just like me.
at October 29, 2019
Email ThisBlogThis!Share to TwitterShare to FacebookShare to Pinterest
Labels: boglins, crate creatures, Groove, Halloween, mgae, monsters, toys, Zone Base