Friday on the 13th is some spooky shit 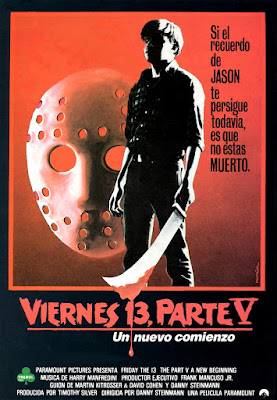 Friday the 13th is like having a mini Halloween randomly during the year. Though when a F13th is during the Halloween season it's extra special! There's all that great spooky stuff on the shelves and those dollar hockey masks everywhere! So when you get some great scary edition snacks sure to make your next bowel movement extra colorful and sit down to watch that horror marathon. Make sure to find whatever channels playing Friday the 13th instead of Wishmaster because seriously FX ... not cool. The hell even.

There's universal rules. You don't spit in the wind, you don't put metal in the microwave, and it's always Friday the 13th part 5 on tv. The listing said part 7 is on now, but it's going to be part 5. It's always part 5. The entire marathon is just part 5. You know, the one with the fake Jason... Roy. Part 5. Now that's not a complete negative, Roy's mask had cool blue stripes and he kills a guy while he's on a porta potty. Part 5.

After Reggie visits his brother Demon, Demon realizes he must visit the euphemism. Like Euchariah, he's on fiya. After an Oscar worthy recreation of your mom after Thanksgiving dinner... I can't even... like his girlfriend and him start singing and... just watch. Yes, that's Juwanna Mann.


The movie is not all about dying whilst pooping, it's also about... so yeah dying on a toilet. Part 5. Oh yeah, it has this awesome song in it! Somebody dies while it plays. Kinda what happens in these movies. Whole lot of murder.