I've been noticing the popularity of Chucky in Universal Studios Japan's Halloween Horror Nights. He practically has a presence every year, haunted mazes, merchandise, he's always there. I like Chucky too. But does he deserve a theme park presence specifically in Japan? He pops up here from time to time, but he's a constant there. So I thought I'd just see what came up for Japanese Child's Play in YouTube and really just a collection or two of commercials. Just foreign language versions of the same movies. Though it's hard to deny how great that kanji looks on that footage, almost at home even. I've admitted I'm a fan of kanji on things, it just looks great, but it really does match up perfectly. 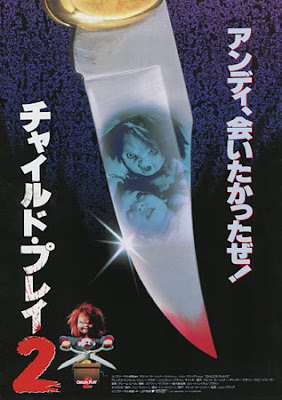