Seen and not Hurt

Nothing say's it's Halloween like local businesses giving out treat bags and reflective safety strips/stickers. Of course they never give out bags with the safety reflective crap printed on them, you get one or the other. Something to carry around all those Tootsie Rolls you're going to throw away in or a magic sticker that somehow will keep crazy Mr. Harmon from running you over in his beat up La Baron. In the early 70's McDonald's gave out cuffs, not strips/stickers for this very purpose. Called the Safety Cuffs, Ronald let your parents know you'll be safe as long as your rocking these stupid looking things. Did you catch the little bit Ronald said at the end of the commercial? I've seen this commercial for years thanks to my ridiculous habit of watching old Halloween commercials all year and just recently realized he said 'children should be seen and not hurt'. It's even printed on the cuffs. 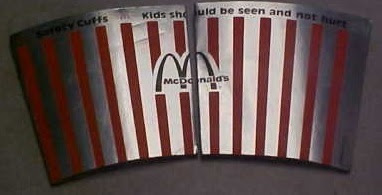 For the longest I thought he said 'seen and not heard', which just made no sense. I mean, if you can't see them trick or treating, I hope you can hear their screams before you commit vehicular manslaughter Mr. Harmon. Anyone else find it fishy so many adults are just driving around carelessly on the one night they know children will be out and in the streets. Oh sure, tonight's the night the headlights just don't work, right. It's cause of this bullshit that Dracula had to wear that crap.


Probably shouldn't trust Ronald entirely too much either.
at August 14, 2019
Email ThisBlogThis!Share to TwitterShare to FacebookShare to Pinterest
Labels: commercials, Halloween, mcd's, McDonald's, Ronald McDonald, safety cuffs, the fucking shake machine hasn't worked since the 90's at McDonald's, trick or treat, Zone Base