Ride way to the Side rapidly 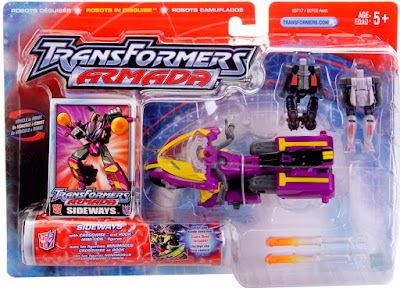 As we're sliding into Halloween around here on Zone Base, I thought a creepy and kinda supernatural bad guy with a habit for wearing disguises would be a good idea. Sideways is just the bot to lead the Halloween charge! I plan on focusing on the Armada toy, if you want to know more about his other toys and fictional appearances, I suggest checking out his wiki page. Sideways was a neat toy. His Mini-Con gimmick was a homage to Headmasters while still being unique (as Armada had a way of making homages still different). If you'll look at the above picture, you'll notice he has two Mini-Con partners instead of the standard one packaged with him. The two could merge into a larger rider body for the motorcycle, or both ride independently leading to a lot of play value in motorcycle mode. 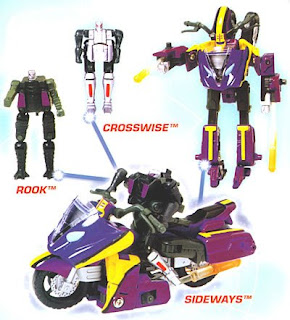 In robot mode things got more interesting as either Mini-Con could turn into a head for Sideways to wear, depending on which one he was wearing would make his Autobot/Decepticon symbol change on the toy. I told you he was neat. 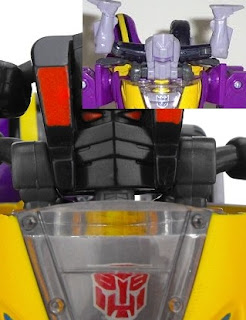 The forehead of each head could fold down to hide his eyes allowing the spare Mini-Con to become a weapon or shield of some sorts. Sideways had exaust pipes that formed arm mounted guns in robot mode that could be shot as a missile with a Mini-Con connected. I usually would use the spare Mini-Con as a crossbow for in this mode. Or at least, I thought it looked like a crossbow. A repaint for Sideways was planned for a Powerlinx version in the Unicron Battles segment of Armada. Plans changed and the repaint was released as a new character in Energon. 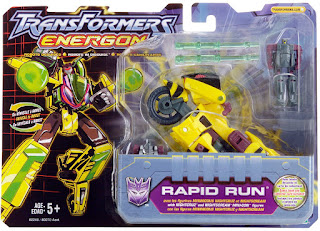 Rapid Run was a pretty good repaint of Sideways in a great hornet themed deco. Rapid Run was pretty much a case filler in the early release of Energon without being featured in any fiction. Well, there was a small blip on Fun Publications  'Ask Vector Prime' page. So I guess that counts for something. I do recall a small rumor about Rapid Run that came not long after his release. At the time I was part of the moderation staff on a Transformers forum and one of the other team members swore he did freelance art for Hasbro at the time. He told us he did the box art for a Waspinator/Thrust repaint of Sideways for Universe. Never you mind this was almost a year later after Rapid Run had been released with altered art of Sideways and the repaint was intended to be Sideways to begin with. *sigh*
at August 01, 2019
Email ThisBlogThis!Share to TwitterShare to FacebookShare to Pinterest
Labels: armada, Energon, Halloween, mini-con, mini-cons, rapid run, sideways, toys, Transformers, Zone Base