Wreckloose is a weird name 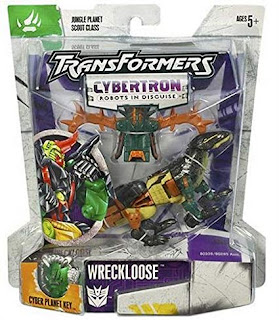 Off screen characters are usually pretty great toys despite not getting any screen time. Wreckloose from Cybertron is one of those really great toys that somehow didn't make it to the show. Realistically because of random marketing and business reasons, but I'll call it because of bad decisions. Wreckloose is a Decepticon from the Jungle Planet who turns into a komodo dragon (autocorrect suggested I misspelled Commodore Dragon there and frankly that's an awesome idea). I was a big fan of the Jungle Planet as it was something of a return to Beast Wars and Wreckloose really felt like a lost beast era mold. 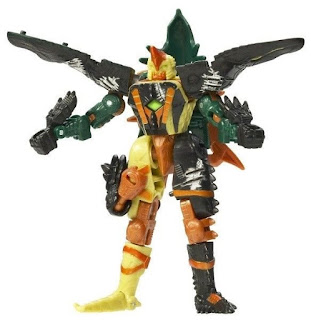 As part of the Cybertron line, Wreckloose had a Cyber Planet Key gimmick in his weapon. His weapon, which was a helmet piece in lizard mode would unfold into a crossbow type weapon. This could be activated in beast mode or when held in his hand. Also felt like a late addition to the design, making me wonder if he was sitting in some designers binder somewhere for a few years. Probably not, but with his overall design and look, I'm convinced he could have been a Transmetal 2 basic... and man should he have been. 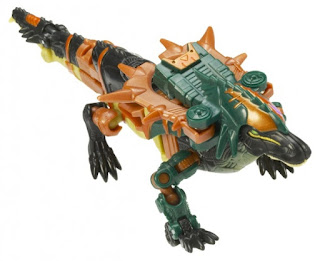 Just as the injustice of such an excellent toy not being featured on the show was committed, so was the misfortune of no repaint into a new character happened. Wreckloose was the rare one and done mold in Transformers that happens less often than you can imagine. I could assume it was due in part to the movie line originally being planned to follow Cybertron immediately (but didn't), but will just chalk it up to another bad decision based on no factual evidence and not ever working in the toy industry. Though later the mold did resurface in discount store releases. 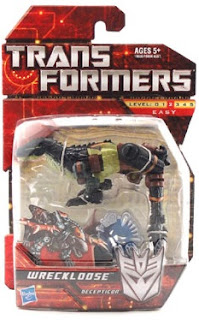 Several Cybertron and Energon figures found their way back onto shelves with minor differences via discount store releases. Initially this was under the Universe banner, but shorty after the live action movies it was just 'Transformers'. For a brief moment in time Transformers were just called Transformers and it was glorious. Wreckloose was re-released around 2010 with minor paint differences in these discount store packages. He could be found on a standard card normally, though a boxed gift set with him included did pop up. The toy is largely the same as his Cybertron release with a few minor paint detail differences.

While the original toy's fiction was limited to his bio (he sets traps) setting him in the Cyberverse story, the re-release didn't really put him anywhere other than your local Family Dollar. Though years later, he was a bit character in Fun Publications fan club fiction in the Beast Wars: Uprising story line. Eventually, the obviously a freaking Beast Wars found his way into some sort of freaking Beast Wars setting. Because holy crap it was a freaking Beast Wars toy that somehow didn't come out until Cybertron and don't you tell me otherwise because dammit it's a fucking Beast Wars toy with a shoehorned gimmick.
beast wars Cybertron Fun Publications Galaxy Force Hasbro jungle planet toys Transformers Zone Base