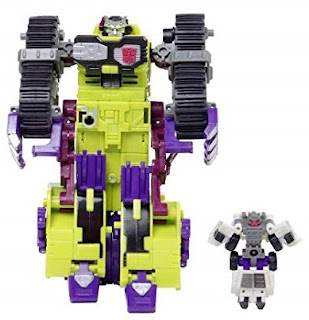 I've said before a few million times that I really like big chunky robot toys. That was part of the reason I loved Armada so much. The was one guy from Armada really took the cake in that department that was ever so fun to play with. Scavenger may look like a Constructicon, he's got the colors, the name, and the look. So much that his Japanese name was Devastor, because freaking look at him. Armada was like that, full of homages while still doing something different. Scavenger in this case is an Autobot, which follows in the Build Team's lead of Autobot Constrution equipment guys.

Scavenger's Mini-Con is named Rollbar, who's a likeable enough Mini-Con that can turn into a dune buggy type vehicle. In robot mode Scavenger has a few 'dead' Mini-Con ports, but most notably is his hip mounted missile launcher that can be fired when attaching a Mini-Con. Yes it's weird. His Mini-Con interaction is more notable in vehicle mode, I'll get to that in a minute. As you can tell by the picture above, Scavenger is a big old boy with some big old arms. Though you've probably noticed his legs, they have no articulation whatsoever. Instead they feature the robot modes biggest and most fun play feature. As you push Scavenger across the floor, he stomps his feet making zany robot noises. He just stomps around in a lovable manner that won my heart over the first time I tried it for myself. It's a silly toy and I love it. 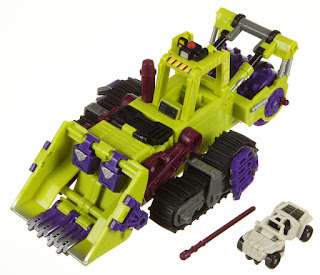 Scavenger turns intro a fun almost sporty bulldozer. In this mode those stomping legs are the bulldozer's front shovel and pushing him along makes it raise and lower. Once again all toy and fun, but admittedly this doesn't bring out as much pure joy as the stomping does. There's just something about him clomping around. However that's not saying the vehicle mode doesn't have a charm all it's own. Rollbar in robot mode can drive the bulldozer. 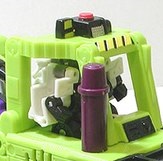 There's even a little button in the seat that pushing Rollbar down will result in engine sounds. Such a fun added play feature that I enjoy so much. Clearly this toy was designed for a much younger child than the adult who's talking about it here and I don't care. I just don't care. It's wonderful and great. Now if you've formed some sort of drinking game about the general lifespan of a Transformers toy, you've got two shots coming. He got a yellow repaint. 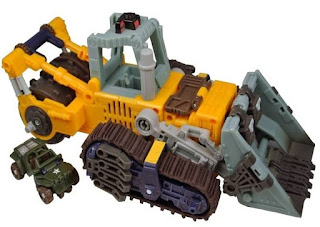 The Scavenger mold got another use in Energon as Treadbolt still partnered with Rollbar who now had a neat military deco. While Scavenger was mostly green with some purple, Treadbolt is a mix of yellow and gray. Scavenger had blacks and gray accenting colors, Treadbolt had browns and blue. It's a really good looking deco that does a lot to make it look different from Scavenger. All the same play gimmicks repeat and was only in early waves with no appearance in the cartoon. It's easy to guess that Treadbolt was basically filler to put on shelves while new product was still being manufactured. There's no more uses of the toy mold and the characters didn't get much life outside of their respected lines. Less in the case of Treadbolt whom mostly got a callback in odd Fun Publications use, while Scavenger did pop up in the Battle Tactics mobile game. 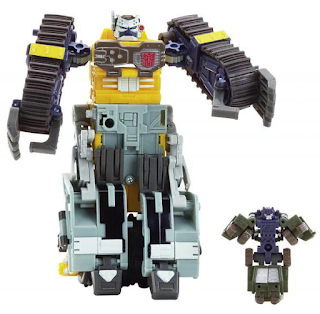