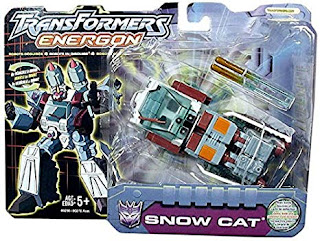 With July the 4th just around the corner (actually tomorrow, but I couldn't figure out a clever way to start this post), I can't help but to think about GI JOE. It just goes with the holiday, ya know? There's been a number of Transformers and GI JOE crossovers over the years and with just due. The two series are forever linked, not just fictionally, but Transformers essentially came from GI JOE. One of my favorite crossover figures (more of a homage I guess) was from Energon. Snow Cat was a Decepticon that turned into the Snow Cat.

The Snow Cat was and is by far my favorite GI JOE vehicle. Just a cool all terrain truck thing decked out in missiles for those missions where the JOE's needed to go somewhere deep in the snow and kill the hell outta it. When I first saw Energon Snow Cat, I was absolutely ecstatic. At the time such a thing was unheard of, dreamed of maybe, but not heard of. If you dared spoke of it, you'd be told how ridiculous and stupid of an idea it was by somebody allergic to air conditioning. That same person later said it was the exact thing they've always wanted and Hasbro should have already made before having some sort of problem when ordering from Subway. I hate that guy.

On the cartoon, Snow Cat was a reformatted Cyclonus for some reason. In robot mode Snow Cat has fold down ski's and can hold his missiles as ski poles... he can ski and he did so in space and it was just majestic. Outside of the silliness of the ski gimmick, he was a pleasantly chunky robot with solid proportions and articulation. The back mounted missile rack could fold over his shoulders for an attack mode. In white with grey and burgundy highlights, Snow Cat was a good looking toy. One of my favorite touches was his windshield wipers could move and even had molded in frost that was cleared away by the wipers, like in the original GI JOE toy. 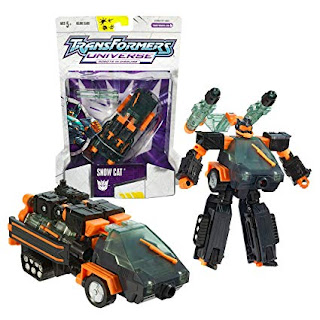 A little later in Universe, Snow Cat got a repaint in a really nice black and orange deco that looked great! Though personally I has hoped for Tiger Force version (and considering Fun Publications involvement in things, it's weird that it never happened), but I suppose one could argue that this is the Night Force version... though that one never happened... aside from this I suppose. Regardless of versions and which ones, the deco looks really good on the toy. I almost wish it was a different character as in these colors, Snow Cat looks less like a polar expedition vehicle and more like a cool sci fi military thing. I could see Monarch or the Science Team rolling around in this.

Snow Cat was an imaginative toy in a time when Transformers brought more original ideas to the table in each line. While I don't have any complaints about modern Transformers, things like Snow Cat are the kind of thing I'd love to see more of. Just something that was neat, fun, and homaged Transformers older brother in a unique way.