Since everybodies talking about Jetfire 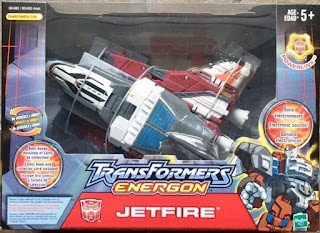 There's a lot of talk about Jetfire these days, which is easy to understand. He has a new and exciting Siege toy that just about everyone wants (including me). With a legacy character like Jetfire, you can't help but to think back to older Jetfire toys when a new one comes out. I was very fond of his toys during the Unicron Trilogy. The Armada Jetfire toy was a great figure intended to homage Galaxy Shuttle. Energon, the follow up to Armada, followed this Jetfire with a new one that always reminded me of Dai Atlas (it's the shoulders). 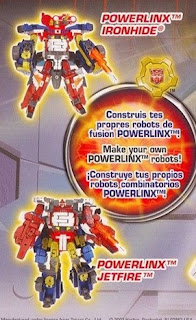 Energon was a line of many gimmicks. Most remembered was the Powerlinx feature found on most Autobots. Autobots that could Powerlinx with one another could either form the top half or bottom half of a more powerful form. At OTFCC 2003 after the line was shown at the Hasbro panel, many fans were comparing it to Landcross, as that team shared the same gimmick. I can still remember staring at those display cases, excited for these new figures. They just looked so good then ... and honestly still do now 16 years later. 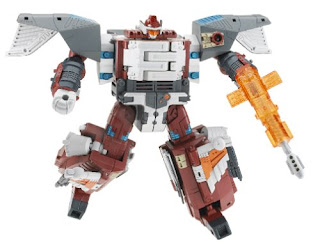 I mentioned above that Jetfire's shoulders make me think of Dai Atlas. Aside from that, Jetfire has this great space robot look. Which is great seeing how he's a robot from space, but I'm specifically meaning he has just a far out look that invokes a space adventurer in theme. His cool satellite gun adds to that nicely. It's a shame that Dreamwave was making TF comics at the time and not Marvel (and not due to anyone's opinion of Dreamwave, they bought the crap out of it while crapping on it), I could easily see this Jetfire in their cosmic settings. 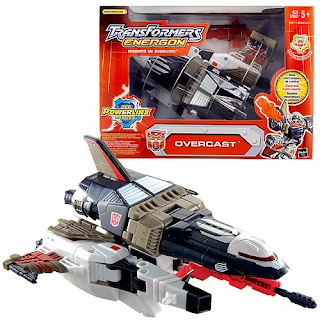 To the surprise of nobody except for the occasional dumbass, Jetfire got a repaint later in the line. Now in a similar color set to the Armada Jetfire in line repaint we have a new character called Overcast. Overcast was Jetfire's brother who's got a different mindset about things. However, just to make things confusing, it was just an upgraded Jetfire in the cartoon. This kind of weirdness was pretty common during the Unicron Trilogy. While currently we have Hasbro and Takara working together pretty seamlessly on Siege, things don't always go that way. Both companies develop their lines with their markets in mind. A characters gender may change here and there, a toy may be nicer here than there. One might release a line before the other. It just is what it is.

In Superlink, which was Takara's version of Energon, some of these repaints were just upgraded forms of the characters. Since the cartoon was produced for both markets at the same time, you just had little oddities like that from time to time. Usually it's not discovered until it's too late or fixed a little later on. It's weird, but just something to laugh at mostly.

Jetfire returned again with a new toy in Cybertron, and another good toy at that. I think there's more good Jetfire toys than bad Jetfire toys honestly. With a legacy character like Jetfire, it can be a hobby onto itself just collecting the different versions of said character. Myself there's certain characters I usually try to get all the versions of and it can be fun. It's weird to me that this version is 16 years old, but I guess that's just how things go sometimes.