I've been loving Transformers Siege toys. I've got literally no real complaints about the line and wish it'd go on forever. It won't though, and with SDCC this weekend, like you I'll find out what's following it. Transformers lines used to get 18 months of a life span, or at least until the line got a refresh. Starting with Power of the Primes though, Generations seemingly has shifted to a year long life cycle. It is what it is and frankly a nice way to keep the selection fresh. Though like I said, Siege will by the end of this year and it's follow up will most likely be shown in some form by SDCC.

Usually by now something has leaked. Hasbro has been pretty good about containing leaks these days, but by now there would be something. Closest we have is stuff for Siege that hasn't came out yet. It's at this point I wonder, will it be that different? Hear me out. Combiner Wars was pretty different from Titans Return, which was similar to Power of the Primes, but still had it's differences. All three were part of a trilogy full of toys pretty dang distinct from each other aide from the beginning and end.

This makes me wonder if the trilogy idea came after the initial idea. As though it wasn't originally intended. There wasn't really any constants aside from Combiners and they weren't a focus in the middle. Titans Return brought about smaller figures with the Titanmasters, which got followed up with Primemasters in POTP. In Siege there are two smaller types of figures with Micromasters and Battlemasters. What's to say the following line won't follow suit with smaller figures? Omega Supreme is basically a play set for Micromasters. a play set that's coming out towards the end of the line. So... obliviously there's smaller figures coming that will still work with him I would think.

Since Siege was announced, Hasbro has really pushed the fact that it's a trilogy. It's in the logo, it's in the marketing. That wasn't present for the last Trilogy very much. So what I'm thinking is, what if the follow up isn't too different? Same sized/styled figures with the story going forward. That makes a lot of sense to me. Maybe the smaller figures will have a different gimmick. Maybe they'll drop Micromasters or Battlemasters and just have one smaller price point (I hope not). Maybe they'll be not much of a difference at all and just the packaging will reflect the story is moving forward from the initial "Siege". Maybe the Trilogy is just marketing.

Or maybe, POTP was an anomaly due to varying factors. If you think about it, there was literally 6 Transformers toy lines available at Walmart at the end of 2018, that had to pull resources from somewhere. Maybe Siege will go 18 months as normal.

I say this because if you look at Entertainment Earth... that cool Apeface and Astrotrain shown off a few weeks ago are not on any upcoming shipments. Well, they were named Siege toys on those posts... shouldn't they come out before December if Siege will wrap before the end of the year? Or maybe they'll be under the new banner and blend from Siege? I guess we'll all find out Thursday when Hasbro does their presentation. I wonder if the new line is coming, what it's name will be? That hasn't leaked yet either. Storm would be a good name. Transformers: Storm sounds cool. 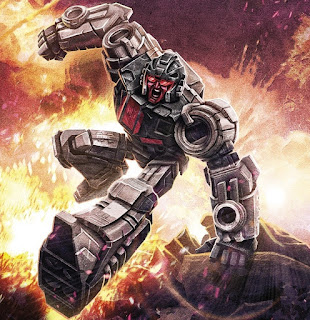