I've always been pretty casual about Gundam. Think they look really awesome, watch an episode here and there, that's about it. That being said, I would have really liked Doozy Bots. It's a shame the show was never made, it's obvious Megaman inspiration and use of SD Gundam designs (I did like that show a lot) strikes a cord with me. It looks like it would have been perfect at the time when there was a lack of robot cartoons on the air combined with my video game addiction firmly attaching itself to 8-bit style games in those formative years influencing a lot of my tastes. I could see myself arguing about how awesome Doozy Bots were on late 90's online bulletin boards (I vastly preferred them to Usenet) compared to Gundam. Hell, there would probably be a big Doozy Bots presence on this weird site about robots and monsters. But alas the show was never made and all we have is this little pilot which just makes me wonder what could have been. 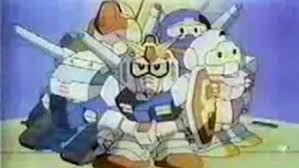