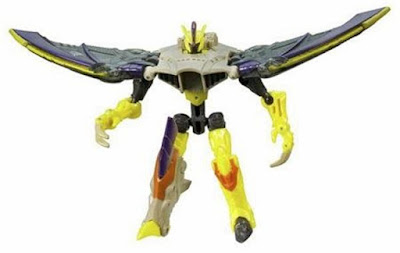 I've been talking about Cybertron toys lately, and for good reason, they were great! One toy from the line was Brimstone, a Decepticon from the Jungle Planet whom turned into a pterodactyl. Brimstone was a fairly good sized toy in the deluxe class with a great neon yellow and gray color set with some purple for good measure. Looking like some cool knight from a mid-evil fantasy adventure or even some evil warrior to be found in a dungeon, Brimstone was just a sharp looking figure. Speaking of sharp, his Cyber Planet Key gimmick was flip out knife blades that came from his wings in either robot or beast mode. 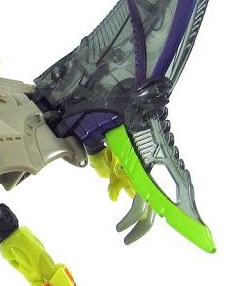 Transformation was pretty simple, but still pretty unique. A simple rearranging of parts and his legs formed the pterodactyl's head while his arms formed it's feet. In beast mode Brimstone was pretty solid thanks to his simple transformation. Simple doesn't mean bad though as the toy looked great in both modes and didn't sacrifice anything in the process. 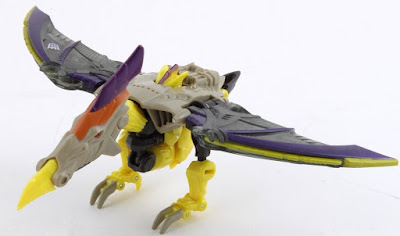 Oddly enough Brimstone's mold was a 'one and done' that rarely happens in Transformers. I blame timing as the toy didn't really fit in with following lines while other Cybertron toy molds got folded into various reuses. Aside from his Japanese counterpart and random value pack style releases there just wasn't any other use of the toy mold. Which is a shame as I can easily see him as a Windstorm homage. Fortunately he did get some love later as the character returned as a BotCon exclusive.