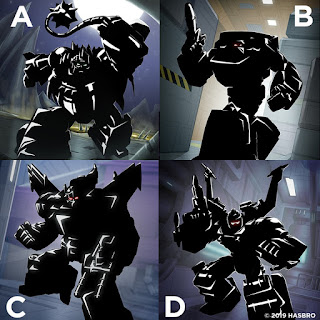 Exciting news TRANSFORMERS fans! Today, Hasbro announced the 2020 TRANSFORMERS WAR FOR CYBERTON Fan Vote, where you’ll have the opportunity to decide which soon-to-be-revealed DECEPTICON will become a War for Cybertron figure in 2020.
Fans were given the first official teaser image on the TRANSFORMERS Facebook page HERE. Four hidden DECEPTICONS are in the running for the Fan Vote and their identities will be revealed in a follow-up post on June 13 at 9AM EST.

Voting also begins at 9AM EST on June 13. To vote, fans must share the name of their favorite DECEPTICON in the post comment section. Voting will ONLY be open for 48 hours, and there is a one vote per user and one character name per vote limit.

The Fan Vote winner will be announced via social post on July 17.