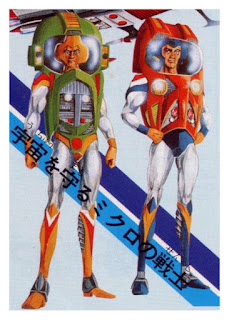 I've noted before how certain things in the Transformers family tree show up from time to time again. Sometimes it's blatant and sometimes it's pretty low key. Today I realized one such instance that happened 14 years ago and I've never noticed until now... and it's really not that low key either (maybe a happy accident though).

The picture above is of  Microman Hoodman in various colors (as Microman toys were generally available in). The figure was pretty cool, you've got a Microman with a neat 'hood' space suit that just exemplifies that classic sci fi look the line pulled off with flair (woo!). The figure was later used in Micronauts as Galactic Defender (with some different parts). One again multiple colors and man what a great toy, right?  So what am I even talking about here? Well... 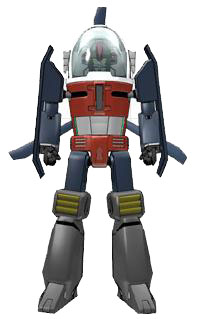 This is Jolt, a Mini-Con from Transformers Cybertron/Galaxy Force. The toy mold was released in multiple colors under multiple names as well. I'd say the apple doesn't fall to far from the tree, but I don't have too. It's more like one of those moments where you say 'it's a small world' about a person or when something was in front of your face without you realizing it until later. It never would have occurred to me until today. On Instagram I saw a Hoodman and thought it was Jolt at first as it was in the background. It's probably a neat coincidence at best... Just by chance, Jolt turns into a helicopter... wait.