One of the more interesting toys from Energon was Mirage. A Decepticon, Mirage turned into a boat. His 'hyper mode' (one of the gimmicks from Energon was Hyper Mode, a sort of attack form for the Decepticons) was wings that extended in boat mode for a flight mode. Mirage was a pretty unique toy to say the least. 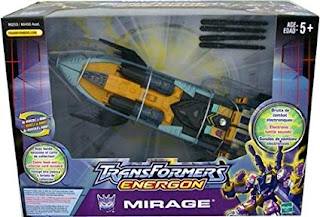 In fiction, Mirage had sort of a dual persona. According to the toy packaging he was an individual Decepticon, while on the cartoon he was a new form for Tidalwave. Common complaints for Mirage were the complex transformation and those who didn't like established names being reused. I liked a lot about Mirage. He looked like a holdover design for a Beast machines Vehicon, or maybe even a planned design for Transtech. He had this neat armored alien look and his boat bits always gave me the impression of a cape. I could easily imagine him as an higher ranking officer. Not to mention, I loved his colors. 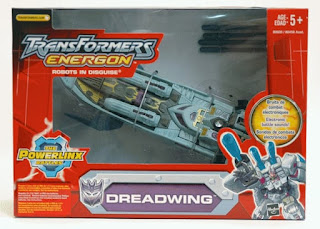 As you could expect, Mirage's toy mold got reused later in the line as Dreadwing. Dreadwing was a straight repaint of the toy as a new character. Cast in lighter blues with some purple and yellow highlights, Dreadwing is a really nice looking figure. He shared the same complaints as Mirage, so really it was a subjective at best if you took issue. Some fans used him as a new Scourge toy, which paired with Energon Galavatron and BotCon 2002 Cyclonus worked pretty well. Dreadwing didn't show up in the cartoon, but did make an appearance in a Fun Publications story. 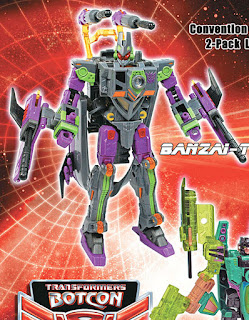 A few years went by and it seemed like the mold had been forgotten when it popped up as a BotCon exclusive in 2009. Serving as a new Banzai-Tron toy... it worked pretty well. Another straight repaint, in the colors it looked like Banzai-Tron so much one has to wonder if that was the character the toy was originally intended to be. Speculation aside, it was nice to see the mold get another use. I doubt they'll ever be any sort of homage to Mirage, which is a shame as it was such a neat and different looking toy.