Practically every other Spider-Man games is called Spider-Man: the Videogame/The Game. Of course this is pretty common in licensed video games. Since I'm not a legal expert (because then I'd be working in law) I'm willing to concede that there's probably a legality involved in this naming. Never the less, this particular Spider-Man: The Videogame just might be the very best. It's a SEGA arcade game from the early 90's, even if it was bad, it'd still be really good.

Despite the obvious nature of Spider-Man on an adventure fed by quarters, the game is a great 4-player beat 'em up with amazing graphics. That's actually an understatement. The game switches between beat 'em up and action platformer between stages. You'll be playing to a point and the 'camera' either zooms in or out. Zoomed in with large characters, beat 'em up level. Zoomed out with smaller characters, action platform time.

You can play as either Spider-Man (duh), Black Cat, Sub-Mariner, or Hawkeye. I usually went with Spider-Man or Hawkeye, though no matter whom you played, you could hold your own. For whatever reason the game never made it to home consoles. There was a slew of good Spider-Man games by SEGA on their consoles, but man it would have been great to play this at home (yeah, yeah Raspberry Pi). I wonder if this was based on hardware capability and by the time the Saturn or even 32X was out if the license had expired. Which is likely the case. 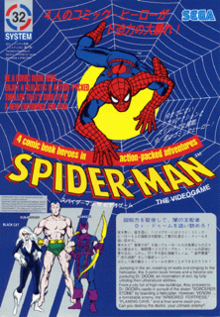