Believe it or not, the 1998 Godzilla movie will turn 21 soon and while I'm sure so many of you will make some joke about even it needs a beer after watching itself type joke. I'll admit to actually liking the movie. It's ok to have opposing opinions about things (despite how people behave on social media). I'm not about to make any apologies for the movie. I don't have to, I didn't make it or have any stake in it. I just have always liked it. Sure, I wish they would have called it anything else, because I'm convinced by any other name it would be looked back at more fondly (it's basically a remake of The Beast from 20,000 Fathoms).

There I was in 1998, all of 20 years old and enjoying student life at my local city college (as opposed to high school where I was miserable). The media hype and blitz for the new upcoming Godzilla movie meant kaiju was everywhere and I was loving it. The 'new' look of Godzilla was kept secret, meant to be a big surprise to viewers... which was spoiled by the toys hitting shelves weeks ahead of the films release. Godzilla marketing was running rampant and almost as big as the movie was itself. Sequels were planned, the hype was crazy and then the movie came out... 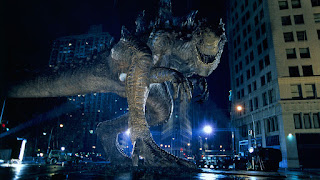 Most people hated it and everything just kinda died. Sure there was the Saturday morning cartoon that followed (pretty sure it was to far along at that point to drop), but it was like within a few weeks everything just kinda got swept under a rug. It's funny, all these years later the movie has it's fans, but most folks hate it. *shrug* It is what it is. Aside from one more movie appearance, the 1998 Godzilla was gone.

One of the more interesting planned 1998 Godzilla projects, of all things, was a roller coaster. Now I could easily see a dark ride or some kind of 4D movie at a theme park, but a roller coaster isn't something I would have thought of. I'm not complaining though, hell make a Godzilla themed anything and I'm there. Oddly enough the roller coaster is actually a still operating ride that's quite popular at Carowinds in North Carolina. The After Burn roller coaster started it's life as a Top Gun themed coaster during the time the park was owned by Paramount. During the initial planning phases, one of the theming ideas for the coaster was the sure to be a hit Godzilla movie. Seeing as the movie came out in 1998 and the ride opened in 1999, it's not hard to see why they went with the more popular movie. 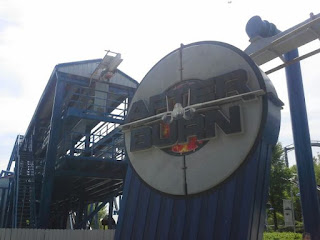 I live in the real world, I understand the movie didn't light the world on fire. I accept reality. Though... just... Carowinds isn't that far away from here. I'd LOVE to be able to drive up there and partake in the Godzilla themed merchandise and snacks for sale around a Godzilla roller coaster. Get my picture next to it and with it's photo op statue of Godzilla. Man... if only the movie didn't belly flop into the pool. But it did.. hard... we all heard the fwap sound from the parking lot.