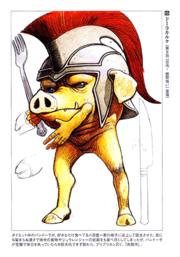 In anticipation of Rangerstop next month, I've been watching Zyuranger episodes lately to curb the excitement. Admittedly I watch enough Rangers as is, but that's my alibi and I'm sticking with it. Earlier today I watched the episode "Terror! Eaten in an Instant" which starred Dora Circe as the monster of the week. The MMPR Pudgy Pig is based on Dora Circe (in case you thought he looked familiar) and the characters are pretty similar (maybe not as much in the case of the second Pudgy Pig). The episode is one of the more silly adventures of Zyuranger featuring a grocery store owning family of who loves to eat together. Bandora was bitter as she was trying to loose weight and saw the family leading her to sick the monster on them.

Dora Circe, despite outward appearances, moves so fast that's he's practically invisible. This leads to some funny bits where the family thinks their food is being stolen by one another and starts fighting. The monster then goes on to eat all the food in their store before moving onto the rest of the town. Before long the entire town is fighting among each other (you get grumpy when you're hungry) and the Zyurangers discover the pig monster causing all the problems.

Initially they confront Dora Circe, whom during the fight eat's their weapons and gains the upper hand before Gnome intervenes and takes the Rangers with him to his home. It's there that the Rangers have to pass a test so that Gnome will give them a herb that will help them defeat the monster. Of course it's a food themed test and the Rangers have to eat an insane amount of food. After Boi is able to eat a carrot (apparently he hates carrots) they are given the herb.

The Zyurangers trick Dora Circe into eating the herb causing him to vomit everything he's eaten (including their weapons) out. The weakened monster is promptly destroyed with the Howling Cannon and the town gets back to normal. Like I said, it's a silly episode. Despite the comedic nature, it goes into the more fantasy elements of Zyuranger that I like so much. The MMPR episode that uses the footage from this episode isn't too different, but enough to be distinct and have a separate plot. I do like MMPR better as I've been watching it for 25 years and have an attachment, but I do think Zyuranger is a better show. Episodes like this are part of the reason why.
at May 22, 2019
Email ThisBlogThis!Share to TwitterShare to FacebookShare to Pinterest
Labels: dinosaur squadron zyuranger, kaiju, Mighty Morphin Power Rangers, MMPR, monsters, Power Rangers, rangerstop, sentai, Super Sentai, toei, Toku, Tokusatsu, Zone Base, Zyuranger