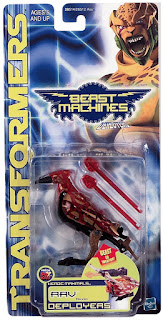 Beast Machines was a weird Transformers line. It had the misfortune of following Beast Wars and forever living in it's shadow combined with being a hodgepodge of ideas. During it's short life it had a few interesting sub lines. One such was the Deployers, a lower priced set of figures meant to serve as partners for your Maximals in the fight against the Vehicons. 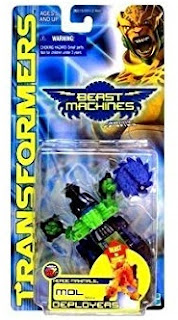 They were a great idea, doubling as a figure and an accessory. Each Deployer had a robot mode based on an animal that would convert into a weapon to be manned by your Transformer. There was three toys that later got alternate recolors, but stayed the same character. Allegedly the recolors were planned to be new characters, but it never came to be for some reason. You had my favorite Rav who turned into a crossbow. There was also Mol who converted into a drill of sorts, being more of a tool than a weapon I guess. Then there was Dillo, whom turned into a catapult of sorts. 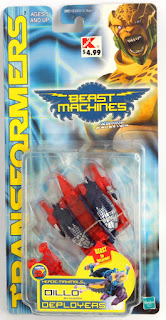 They never appeared on the show, but between the packaging and appearances in 3H's BotCon comics, they got a little life. The Deployers were Drones found by Nightscream and were brought into the team. Despite being drones, each has an individual bio and personality. In the 3H BotCon comics they were scene in action along side the Maximals. That's one thing I always liked about those comics, they'd take place along side the show and feature non-show characters. It was a great way to breathe a little life into toys that generally never got a chance to shine.

The Deployers were a small addition to the overall line and for the most part generally forgotten about these days. They were just odd enough to be neat and added just a little extra play value to your toys. They are small and colorful. The mixture of translucent and opaque plastic makes for generally really nice looking toys of little mechanical animals. With the Battlemasters in Siege and other weapon based partner Transformers that have been available recently, I'm surprised a new version of the Deployers hasn't been on the shelves yet.