All the Powers of Grayskull 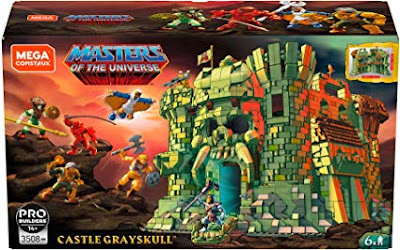 Man... man... MAN I want this. I've been a steady fan of the Mega Construx Masters of the Universe figures, they're exactly what I've wanted in a He-Man line as an adult. The upcoming Castle Grayskull set looks amazing. I'm firmly rooted in classic He-Man and this nails that right in the head. Not just is it a great recreation of the classic play set, but it's even full of nods towards the original mini-comics and toys. 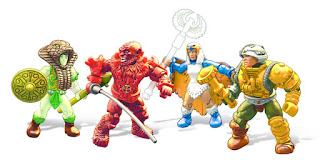 The included figures not only contain the Sorceress, but figures of Man at Arms, Teela, and Beastman as they originally appeared in those mini-comics. Man at Arms doesn't have his mustache like the original toy! Of course this version of Duncan also comes with the Battle Bones set, so they'll make for some great soldiers.

Things like this are really fun and get me excited anticipating future releases. I'll be honest though, Grayskull commands a hefty price and I'm likely to wait for a sale or even an appearance at Ross to get mine. Regardless, it's things like this I really like seeing and can only hope for more great stuff like this in the future.
at May 29, 2019
Email ThisBlogThis!Share to TwitterShare to FacebookShare to Pinterest
Labels: battle bones, castle grayskull, fandom, He-Man, Masters of The Universe, mattel, Mega Construx, mini figures, Zone Base