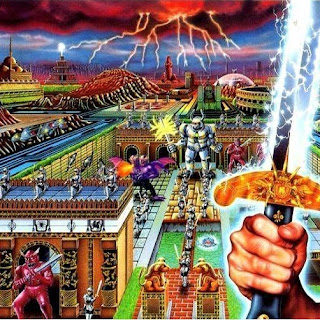 I have a little story to tell. Last night (for me, for you it was yesterday) before bed, I played my portable Genesis player that I keep by my bed (as I usually do). I played Gain Ground for a while before getting sleepy. Ever play Gain Ground? It's an excellent game. Each round you have a level you have to clear with each of your assigned characters, either by reaching the exit or killing all the onscreen enemies. It's a mix of strategy and good old arcade shooting enemies and dodging the enemies fire. Just a great game that I'm surprised isn't more popular in today's world of mobile games.

So as I'm sleeping I have a dream, and in this dream I help a person escape prison. I don't know how I got involved, but I pulled it off. Perfectly too might I add, somehow I sneaked them off into a car and into busy traffic. Though later as I worried that the police my get me for helping the person escape, I decided to cover my tracks. That's when it became all to clear as to the only thing that would clue the police to my involvement. You guessed it.


If they knew I had been playing Gain Ground, they'd know it was me who helped the guy escape.
at March 06, 2019
Email ThisBlogThis!Share to TwitterShare to FacebookShare to Pinterest
Labels: fever dream, gain ground, Genesis, master system, Mega Drive, retro, SEGA, Video Games, Zone Base