I was very happy to learn of the new Ghostbusters film planned to be released in 2020. Sure, the 2016 Ghostbusters movie didn't set the world on fire, but I was having such a good time with all the cool Ghostbusters stuff out that I didn't mind. That's what I hope happens again, though if the movie is a giant hit I wouldn't complain. I think what I want most is a repeat of those great blind bagged mini figures. It was a lot of fun collecting those. I talked last week about Meikyuu Hunter G, so in response to the great news, here's the attract mode for the Ghostbuster game made from Meikyuu Hunter G! Think I'm going to put some time in this weekend with it and some homemade Ecto Cooler out of happiness! 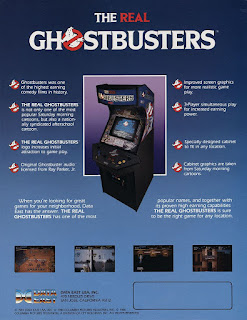