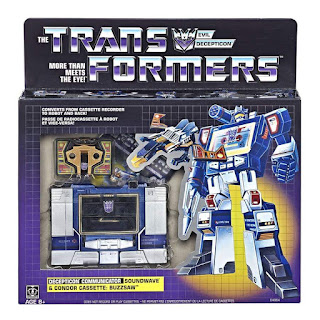 News floated out this morning of a Soundwave seemingly joining Optimus in this years Walmart vintage Transformers selection. So far this years selection of G1 reissues is pretty fun and well suited for the 35th anniversary of Transformers (despite the lack of hoopla being made for the occasion). If I'm going to speculate the selection based on the 2018 batch, that's 2 average sized figures (one a little bigger), a larger figure or gift set, and 4 basic sized figures. Optimus seems to be taking Hot Rods spot in that with the omission of his trailer and Soundwave seemingly taking Starscream's place.

These would be similar sized boxes on that store shelf and hopefully for around the same price (there's been a lot of throwing numbers around, but I'm waiting for the actual price). So wondering who the larger figure/set would be and going by the reissues Takara has put out in more recent years as a guideline of what molds are most likely available. I'm wondering if maybe a Bruticus box set isn't too much of a stretch to expect for a gift set or maybe a Skylinx for a larger figure. Kinda hope more cassettes get released for the smaller sized guys to match up with Soundwave. Though I'd not be surprised if there's more Minicars as they'd probably try to keep the numbers of good guys/bad guys somewhat equal. I kinda hope they'd shoot for something a little bigger, but not too bigfor the larger figure to keep the price down. Something like Sixshot would be awesome.

I always see a lot of folks hope they wish for ~insert random slightly obscure or rare character~, but I don't see that really happening. I'd love to, but realistically they're going for the nostalgia crowd. Sure Transformers fans are a sure thing, but the more mainstream crowd that's likely to buy a G1 Transformer in retro packaging is going for Optimus, Starscream, or any of the other generally recognizable bots. I'd love something like Turbomasters... but that's a stretch.

I had a bunch of fun buying the last batch at Walmart and even though I've got multiple of some of these guys, look forward to walking into a Walmart after work and finding Soundwave sitting there on the shelf. That's a lot of fun for me. I don't look forward to explaining the term Great Value BotCon though, but will continue to use it. It's not my fault some people are oblivious to an obvious joke.