One of the Christmas gifts from my mother was this neat Strarscream from Cyberverse. The Ultra Class version, Starcream is a big chunky version of the classic character. I've pointed out before how much this toy reminds me of Skyquake and hold out hope for a repaint that plays homage to it or one of it's repaints (a black version would make for a good Machine Wars homage). The toy is fun to play with. Even though it's hard to look past the hollow nature of the figure, I found myself enjoying it. 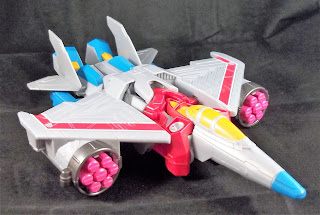 As you can expect, Starscream transforms into a jet similar to his past alt modes. It's a fun toy that has a cool firing gimmick in those huge gun pods. 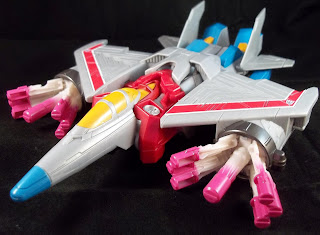 A little switch above his cockpit deploys his cluster missile attack with a loud pop that will scare the cats. It's a fun play feature that the toy is obviously based around. Starscream is a fun toy intended for a kid to fly around the living room. Though, this goofy adult still enjoyed it a lot.
at January 11, 2019
Email ThisBlogThis!Share to TwitterShare to FacebookShare to Pinterest
Labels: cyberverse, diaclone, seekers, Starscream, toys, Transformers, ultra class, Zone Base