Often I'll mention how the McDonald's Beast Wars Happy Meal is one of my favorite things in my Transformers fandom and get a smile and nod in response. It's just one of those things that gets dismissed easily by a lot of folks. I guess it's hard for some people to take something as basic as a Happy Meal as something that would mean something. Regardless, it's always been something that meant a lot to me and I thought it would be a good time to divulge into that.

Let me start by explaining what it was like to be a Transformers fan at the time (for me anyway). G1 ended while I was in middle school. I was still a kid and the internet wasn't exactly a thing then. So if you liked something, you just liked something. If it was nerdy, sometimes you kept it to yourself. After all, none of those people seemed to exist outside of school, so really you could keep anything secret and nobody knew. So here I was, liking a thing that was over. I'd re-read my comics and books, appreciate the toys I had and that was it.

At some point I had started reading those classifieds that were in the back of magazines like Fangoria or Lee's Toy Review, or even some video games magazines. There was always some listing for catalogs or other stuff in those. Send in your address and a few dollars and you'd be getting random publications in the mail. Usually catalogs from small businesses, odd pamphlets about whatever subject matter, and random home made booklets/magazines about whatever subject matter (I thought fanzines were a strictly punk rock thing, so I just called them books at the time). It was here where I discovered there were others like me who liked these kind of things. From reading various hobby related magazines, I knew others were into things like toys and cartoon or specific series, but a strictly kid thing like Transformers that was over (or so I thought) wasn't something I thought would be a thing. So in these books I'd get in the mail, I'd see occasional stuff about Transformers. People would write their own stories and made it go on DIY style.

Later when G2 happened I was overjoyed. I'd watch the cartoon, read the comics and get the toys when I could (I did have some great luck finding the toys at the local thrift shops regularly). When G2 was over, well crap it was over again. By this time I was in high school and I had stopped mailing in those dollars to random addresses and had moved on as teenagers do whenever the wind blows. Though I still would read my magazines and occasionally there would be a Transformers article or whatever and that was cool. It was in these where I learned about BotCon and heard my Dad say 'hell no boy, go mow the grass' in a new way.

The internet was slowly becoming a thing I was using at school when the opportunity would arise. Though it was a weird school based thing and I wasn't able to use the full internet just yet. Through it was hobby based discussion in certain areas and I found myself talking Transformers on the occasion I'd use it. During this time I was working at McDonald's after school like most teenagers. The bulk of my paycheck went towards my car, and what was left was spent on whatever including the random toy when nobody was looking. During this time I'd take note in various Happy Meals and often bring the toys home. Sometimes for my Mom, sometimes for me.

By my senior year, Beast Wars became a thing and I wasn't an early adopter. Not because it was animals or anything you hear in anti-beast era arguments, but because I didn't understand the name change initially. Maximals? Wait, there's more Predacons? It wasn't long before I got over that and found myself enjoying this fun new incarnation of my Transformers. Then one afternoon I saw it while slinging more burgers. By the fry cookers were usually hung informational posters about whatever promotions and there was an upcoming Happy Meal...

Needless to say, I studied that poster over and over. So much that the manager (who did NOT like teenagers) would yell at me to get back to work regularly. Also, wouldn't let me keep it when it was time to throw it away. In all fairness, teenagers can be pretty annoying to adults, but this lady was particularly mean. It wasn't long when the toys showed up and went with me. Now these weren't just your average Happy Meal toy, they were really good little Transformers toys that were essentially free with a basic lunch. The figures found themselves all over my teen-aged bedroom. Many nights were spent playing Light Crusader on my Sega Genesis with those little Happy Meal toys stationed nearby. When I would pause to use for whatever reason, often that would include playing with them a little. Regularly one would find itself in my backpack at school or tagging along wherever I would go.

By this time I was in community college and that after school job had changed from McDonald's to Office Max. The at school internet was more open and I spent a lot of time looking at various Transformers sites. There was a whole wide web of folks who also liked Transformers. I had started using bulletin boards on sites like Excite and Yahoo and would talk with other fans. It was great. Before I knew it, I had internet at home and found myself spending more and more time as a member of the Transformer fan community. Eventually McDonald's had a Transmetal Beast Wars Happy Meal and I scooped those up too. I was still a broke kid, but anybody can afford a Happy Meal! Those toys soon joined my seasoned McBeast Warriors. Fortunately during this time Transformers were released at a slow pace, so a broke kid like me didn't miss out on too many when he didn't have the extra money for one. Slowly I was starting to generate something resembling disposable income and those purchases became more frequent. Around this time Beast Machines had started and eventually they had a Happy Meal too. I don't have to tell you they joined the ranks of the crew, but I'm going to. They did.

I was getting older, was out of school, and was still at that Office Max for a little while. I had a decent apartment with a friend and even slowly growing my disposable income and buying all the Transformers all the time. Remember those G2 toys at thrift shops? Well, those Beast Wars Happy Meal toys started appearing at the same shops for practically nothing. So before long I had a bunch of extras. Because why not? I loved them despite slowly amassing an army of more expensive toys. It was during this time I was finally able to start going to BotCons and at this point the Transformers fandom was a big part of my life. Despite all the toys I've gotten over time, those silly Happy Meal toys always held a special place in my heart.

Flash forward 20 years after that first beloved Happy Meal. The Transformers fandom had changed in many ways and BotCon was coming to an end. A new group had took it over in 2005 and despite the con having it's share of drama over the years, the last few cons had more than I think anyone wanted to deal with. I know I got caught up in the negativity regrettably, I always hated when fandom drama would overshadow things and here it was doing just that. 2010 had been the last show I went too and started focusing more on smaller fan run shows. Mostly because BotCon had become too expensive for me to justify and the smaller shows offered more of what I wanted out of a fan convention at that point. Though even the most jaded of us old farts didn't want to see it end and in 2016 the last BotCon was held with sadness in a lot of our hearts.

I didn't go for various reasons and spent some time before it came thinking about things relating to the Transformers fandom. Oddly enough, it was that period of time that convinced me to get off my butt on this Zone Base idea that I had for quite some time. Even though the BotCons of old were long over, I think that same spirit was kicking in. Then almost like some weird sign, info about some of the BotCon exclusives started coming through the usual channels and you wouldn't believe it. 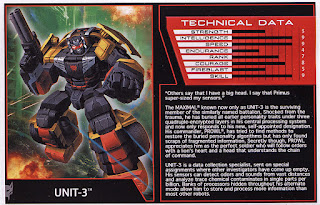 One of the last BotCon exclusives was a homage to one of the original McDonald's Beast Wars Happy Meal toys. BotCon made a toy especially for me. All negativity from the past had already faded, but now they left me a little note goodbye. I arranged for Kilby to pick me up one at the con and made a point to do a old BotCon tradition that Saturday Night. Every BotCon I'd eat a Big Mac meal at some point during the weekend. I had my Big Mac combo and finally launched Zone Base. Unit-3 is in my toy room well guarded as something I consider special.

Those silly McDonald's Happy Meal toys hold a special place in my heart. Admittedly it's not the most fancy of things to be concerned about and maybe a little absurd to consider in the thousands of dollars spent of robots, but they're a big part of the whole thing to me.