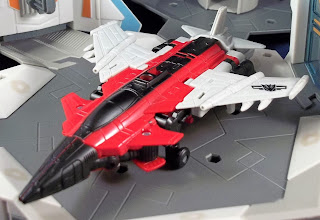 Shatter turns into a neat little jet that's hard to not like. Featuring some landing gear, it's a basic but a very pleasant jet. As an Energon Igniters figure she is compatible with the gimmick blocks in the line that can be connected in her 'attack' formation. 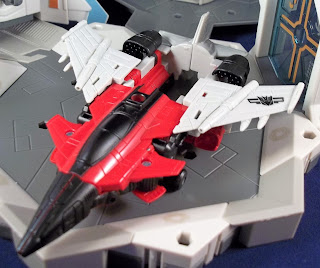 In this mode Shatter has some great missile pods deployed and the addition of the gimmick block allows for the jet to roll around on it's landing gear. Just a few steps and Shatter forms her robot mode. 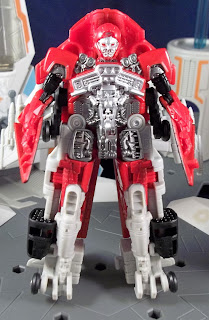 Shatter is a perfectly acceptable robot, but I wish there was more to her arms. Not necessarily anything major, just something else would really go far. Probably because they look so spindly next to the rest of her body. Super solid toy though.
at December 06, 2018
Email ThisBlogThis!Share to TwitterShare to FacebookShare to Pinterest
Labels: Bumblebee, Bumblebee movie, Energon Igniters, movie Shatter, power series, shatter, toys, Transformers, Zone Base