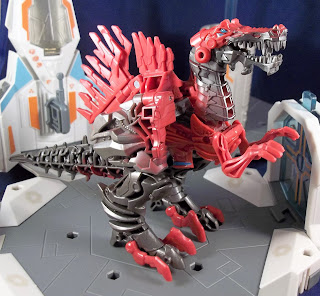 Scorn is a Spinosarus and a member of the Dinobots first introduced in Age of Extinction and featured in The Last Knight. It's a great design that didn't as much focus as I'd like, though that's a complaint I have with the Dinobots use in the movies. As a Turbo Changer he transforms in a few steps into his very knight like robot mode. 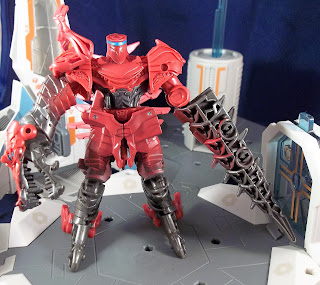 In robot mode, Scorn's tail forms his left arm which resembles a javelin. If you can't tell by the picture, he has shoulder articulation and the dinosaur head swivels to use as a hand. Honestly despite his simple transformation, I found myself getting frustrated trying to transform him. I don't know if it's just mine, but his parts kept locking up against each other. Scorn is a nice looking toy though, just could be a touch better thanks to his transformation.