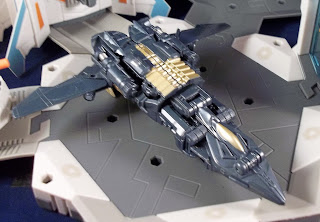 As he appeared in The Last Knight, Megatron is a space jet of sorts. If that what that's called. I mean, it's not an outright jet is it? Or is it a normal jet that just looks awesome? Whatever it is, it's a sharp looking vehicle and in this toy is presented well. He's a Turbo Changer toy, which means transformation is done in just a few steps into his viscous robot mode. 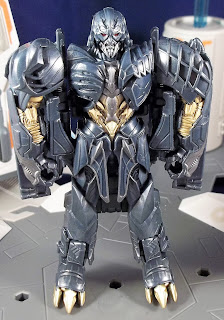 Megatron almost looks like he should be another character here. That's a complaint mind you, I just feel like I'm looking at Straxus instead of Megatron when I look at this version. In robot mode Stra... Megatron is powerful looking and imposing. Almost like some statue of a warrior in a Thor movie or some viking themed monster. He only has shoulder articulation, but I don't notice it too much. It's a great design and works well as a Turbo Changer figure.
Megatron one step changers straxus the last knight toys Transformers Turbo Changers Zone Base