December 05, 2018
Beserker may look a lot like one of the Dreads from Dark of the Moon, but he's actually a Decepticon from The Last Knight. I say that as I was really looking forward to the Dreads returning and I ended up with a Decepticon who was literally just on screen for a second whom looked like a Dread. In vehicle mode, he's a neat police type truck. As a Turbo Changer toy, he transforms very quickly into a basic robot mode. 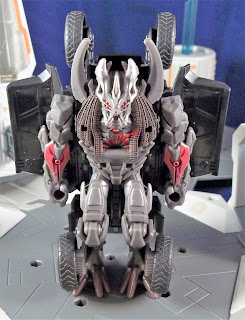 Once again, he's not one of the Dreads somehow, but a very menacing looking robot. He makes me think of Skullgrin in this form and I'm considering another trip to Five Below to pick up an extra to customize into one. There's not a whole lot to say about this toy other than what can be seen in the pictures unfortunately. Turbo Changers are by nature simple figures, and he's pretty simple alright. Still, not bad for what it is and I do like the truck quite a lot.
beserker Dreads one step changers The Dreads the last knight toys Transformers Turbo Changers Zone Base