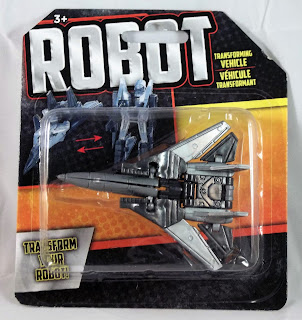 I've made my fondness for the Dollar Tree 'ROBOT' toy line known before. It's a pretty easy to buy line of robot toys of dubious legality available for the whopping price of 1$ each. One figure from the line managed to escape my grasp until this weekend when a quick stop found it in my hands. Seeing as the figures don't have names... it's a jet. 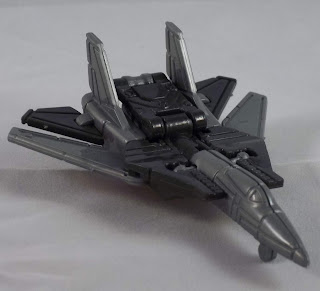 If the toy looks familiar, that's because it's a weird K.O of the Mini-Con Thundering. I say weird because in robot mode it's not assembled correctly. Jet mode does look sharp in a basic dark grey and black color deco. There' no paint, just the two molded colors. In fact, the jet is the best of the toys modes. 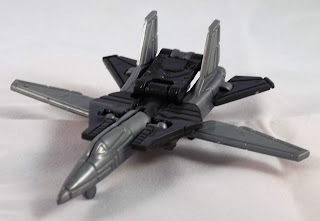 Transforming the toy was a test in patience as it kept falling apart. In the manufacturing process, lots of parts were omitted and the robot mode as very different from the original toy. 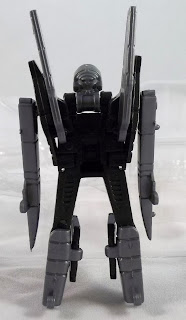 If you feel underwhelmed looking at the picture, then don't feel alone. It's a good thing I've gotten plenty other of the ROBOT toys before, because this is easily the worst of the line. Loose joints, a cobbled together robot, and I'm pretty sure it called me something unacceptable. It's hard to complain about a toy that cost only a dollar though and I really liked it in jet mode. So if this is the wort of the line, then oh well, it's the worst of the line. I'm hoping more figures get released in the line as I enjoy buying the figures. I already love a trip to the Dollar Tree as is, having something special for me waiting like the ROBOT line is worth the occasional poopy robot mode.
bootlegs discount store robots dollar tree jet mini-con mini-cons robot robots toys Transformers Zone Base