November 01, 2018
Possibly giving Action Master Thundercracker a run for the brightest colored Transformer ever, Acid Storm from the Cyberverse line is practically a light source. Which a more clever writer would use an an analogy for how bright of a shinning star he is. 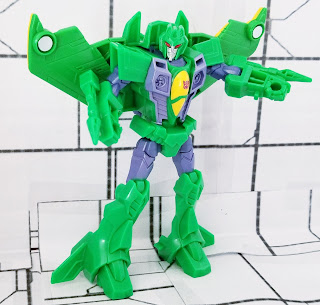 Acid Storm is a repaint of the Warrior Class Starscream mold and honestly a more interesting use. The bright colors just make the sharp look of the Cyberverse seeker design look a million times better. While I wish he featured some of the purple from his box art, it's hard not to appreciate that toxic waste neon green. When I watch the Cyberverse cartoon, I often find myself mentally using the various Seekers in place of Foot Soldiers in a early 90's Konami arcade game. Seeing as so many early 90's beat 'em up games took place in a post nuclear apocalypse world, Acid Storm here would fit right on in.

Being a Cyberverse Warrior Class toy, Acid Storm has an action gimmick attack. Like Starscream before him, his is a spring loaded spinning attack where his wings are intended to act as blades. Being a lame middle aged man, I had a hard time getting this to work well. With the moving parts engineered to make this work, I can't help but to wonder if omitting them would have allowed for more articulation in the toys budget.

Surprise, he turns into a jet! In this mode, Acid Storm looks really good, though his underbelly is a bit messy. I'm not going to complain about this as I think I've had more jet Transformers with sloppy underside than clean ones. It's not totally unexpected. One neat bit I appreciated was the landing gear serves as a locking peg to keep Acid Storm stabilized in robot mode when not using his Toxic Slice spinning attack. That was a nice bit of toy economy working well in the general engineering. I mentioned before how Acid Storm would be at home in a arcade game? Well in jet mode, I could certainly see playing him in a shoot 'em up game by Irem. 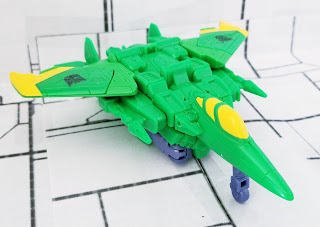 Acid Storm is a good looking toy and honestly a toy I really like. I can't say I recommend him unless you already enjoy Cyberverse toys though as folks are really divided on Cyberverse as is.Though I'd be hard pressed to not enjoy such a neon robot.