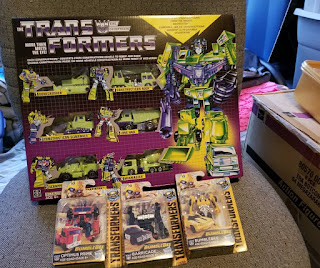 Enjoyed another peaceful weekend. Friday morning before coming home from work, I stopped by Walmart and scored Devastator leaving only the G1 reissue Minibots left to acquire. Kinda hoping they do more later, but at the same time don't look forward to trying to buy them before they sell out. Saturday I stopped to get groceries and breakfast on the way home as later that night the Mrs and me went to see The Nun at a later evening showing.

Before leaving and after some sleep, I caught up with my DVR. Cyberverse was excellent this week. I really enjoy this show and it's getting better each week. Usually a cartoons first episodes are the worst and the first episodes weren't bad! At this rate I wonder if the series end will be amazing. I enjoyed seeing Shockwaves little drones, making me wonder if the toy's eventual repaint will be a troop builder of those. Makes me think of that old BotCon idea of using the Megabolt Megatron mold as a bug like army for Cryotec.

Ninja Steel was decent, the 'lesson' of this weeks show was decent, just felt like it needed a little more something. Basically, Calvin gets a job as a mechanic and quits school. Decides to go back to school after helping fix the Lion Fire Megazord with Mick, with Mick showing him what to do. Though the message is solid and boy I liked this weeks monster, it felt a little uneven on the lesson part.

The Nun was great. We enjoy the Conjuring movies as a whole and this one was pretty top notch. Maybe not perfect, but pretty close. I really liked the setting, pretty much what I wish Universal would have done with Dark Universe. Here we had basically an updated 'old timey' spooky movie in a castle that had substance AND style. Action packed with scares, this was a great movie. I like The Conjuring moves as a whole, but I didn't like the Annabelle moves as much as the main movies while I feel this one might actually be better than the main movies. Just an overall good horror movie.

Afterwards we went to the nearby Walmart to check out it's Halloween section and I picked up the rest of the Bumblebee Speed/Legion series wave 1. It's funny, these toys are $5 again while the Last Knight ones jumped up to 8-9$ last year. Weird. We got some Steak and Shake and came home. Great night. Sunday was spent similar to last weeks, more work in my toy room and just a nice day at home. I learned of a new smaller Authentics Grimlock being found, so this morning I looked without luck for one this morning while doing some errands. One day little Grimlock... one day.
at October 08, 2018
Email ThisBlogThis!Share to TwitterShare to FacebookShare to Pinterest
Labels: cyberverse, devastator, Halloween, Halloween Horrorcon, Horror, legion class, Ninja Steel, Power Rangers, speed series, Super Ninja Steel, the conjuring, Transformers, what the heck I did this weekend, Zone Base