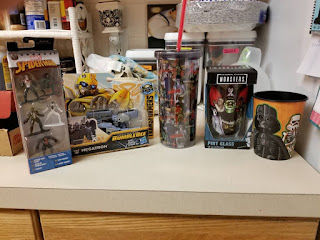 Honestly it was a pretty low key weekend. Aside from getting groceries and a little shopping at Walmart, we didn't really do much. Did some more clean up on my toy room, ate pizza and BBQ. I did watch the first 2 episodes of SSSS. Gridman, which was AWESOME and full of random TF Easter Eggs. Cyberverse wasn't as good as last week, but still ok. Super Ninja Steel was funny. I'll give a more in depth post about Gridman a little later. Didn't find the G1 Minibots, but brought home Power Series Megatron as well as some Nano Metalfigs, some swank Universal Monsters cups and the most rad Halloween Star Wars cup I've ever bought for a dollar.

Also ordered some stuff from Godbeast. Godbeast is awesome. Today (Monday) I went out to vote (early voting began today in my area, as a night shift worker it's generally my best option) which was a bit of a drag as they were having machine problems and it took a lot longer than I'm used too. After that a trip to Walmart again to order some contacts before my prescription expires and my insurance renews (my vision hasn't changed in over a decade), figuring I'll take a new exam after the new year and get some new glasses. While there I took a bag of pennies I found while cleaning my toy room to the Coinstar and bought Power Series Bumblebee. They had actually restocked since Saturday, I was tempted to grab Acid Storm but decided to hold off until next weekend. I have no real reason why.


I think I said Gridman more than 'uh' or 'like' the entire weekend. Which is a new record.
godbeast Gridman Halloween Halloween Horrorcon monsters nano metalfigs Power Rangers spider-man ssss. gridman Star Wars Transformers Universal Monsters what the heck I did this weekend Zone Base