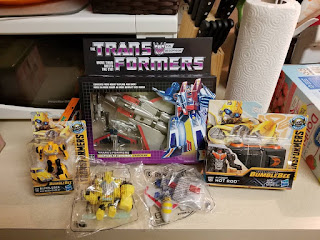 This weekend was pretty laid back. Though, I suppose I should bring up Friday, Friday morning I swung by Walmart on the way home from work and got the reissue Starscream and grabbed one of the new Speed series (formerly Legion Class) Bumblebee toys. They had others, but seeing as I was grabbing a $35 figure... I felt like waiting to buy the rest. The following Saturday morning I went with the wife to pick up our groceries and stop by Target. While At that Walmart I picked up the Bumblebee Power series Hot Rod.

Initially I thought the Power series was a new name for Legend class (like Speed for Legion), and seeing the packaging I thought they were Turbo Changers... I was wrong. Power series is a new size class obviously aimed at children, that like the Speed series works with the Energon Igniters power brick thingies. On it's own though, it's a fun little basic figure. When they first showed up online, I had said they remind me of G2 toys... and it still does. The figure is very similar to a standard Generation 2 toy without it's gimmick weapon. That certainly works for me as I've always really dug that style of toy. Hoping to see these continue and maybe even stretch out into something with more traditional robots.

We ate lunch at McDonald's, where my wife grabbed the TF happy meal toys for me. We pretty much stayed home the rest of the weekend aside from a quick run out for Subway for lunch Sunday and a quick drop by the Dollar General. I was hoping to score the Mummy Army set, continuing from last Halloweens skeleton army set and went home with two! Most of Sunday was spent organizing my toy room. It's a project I've been putting off for some time now and plan on spending the next few Sundays doing. Not just for the sake of cleanliness, but also there's going to be a few weekends with my Mom staying over coming up and the futon in there serves as a guest bed. Not to mention we hope to move next summer (and this time we mean it), so having it mostly packed up ahead of time is a good thing. I recorded a new Transform Squadron episode that should go up soon, so hopefully you all will enjoy that. 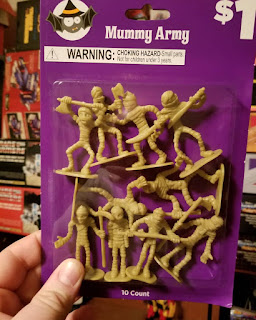